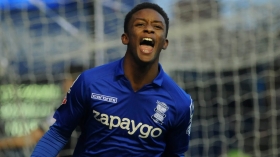 Everton: Tony Scott claims Lampard knows Demarai Gray and Anthony Gordon aren’t good enough
... claim from Scott given that Gordon was the subject of huge interest from Premier League clubs over the summer and a £60m bid was even being ...
18/11 18:55

Crystal Palace, Everton and Tottenham Hotspur are among the clubs interested in signing Demarai Gray from Leicester City this month.

Leicester City are reportedly ahead of Chelsea in the race to sign Brentford winger Said Benrahma during the summer transfer window.

Gray told he has a Leicester future

With top Premier League clubs monitoring his availability, young English winger Demarai Gray has been told that he has a future with Leicester after struggling to make his mark last season.

Lazio forward Keita Balde Diao has snubbed the chance to link up with Tottenham Hotspur during this summer's transfer window.

Tottenham Hotspur, Liverpool and Everton are all preparing to offer a fresh opportunity to a Leicester City star who has shown signs of great promise in the Premier League, but has grown frustrated at a lack of game time this season.