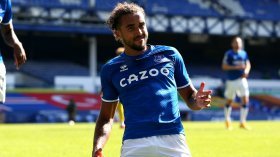 Everton can land Dominic Calvert-Lewin 2.0 with Beto swoop
... be a hugely valuable asset to Lampard in his pursuit to change Everton’s fortunes in the Premier League. The 24-year-old has scored 30 ...
01/12 20:35

Frank Lampard's frenetic summer is likely to continue right up until transfer deadline day, but the former Chelsea manager will be happy that a loan deal for Ludovic Ajorque is all but agreed. The 28-year-old striker, who has an opposing presence in the box standing at 6 foot 6 inches, will sign a 12 month contract with the Goodison Park outfit this week, departing Strasbourg on a short team deal.

Fulham and Everton are both chasing the signature of Bamba Dieng, the Marseille forward who is likely to leave the Ligue 1 club this summer after being told he is no longer required in the first team. With Richarlison leaving the Toffees, and Dominic Calvert-Lewin injured, the club are desperate to find a new striker, as are Everton who are concerned that Aleksandar Mitrovic could run out of gas as the season wears on.

Arsenal have decided against pursuing the services of Everton striker Dominic Calvert-Lewin, according to Football Insider.

Arsenal are reportedly keeping tabs on Victor Osimhen and Lautaro Martinez ahead of the summer transfer window.

Arsenal are ready to make a summer approach for Everton striker Dominic Calvert-Lewin, according to The Sun.

Manchester United have their sights on French striker

Manchester United are reportedly keeping tabs on Moussa Dembele ahead of a potential transfer this summer.

Manchester United have identified Richarlison as a potential candidate to replace Cristiano Ronaldo this summer.

Arsenal to miss out on Serie A striker?

Arsenal look set to miss out on Sassuolo striker Gianluca Scamacca amid the fierce competition from Inter Milan.