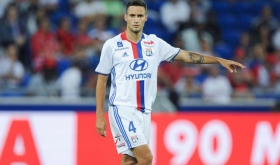 Centre back Emanuel Mammana is a powerful defender currently playing in Ligue 1 for Lyon. Having made the breakthrough for Argentinian giants River Plate, Mammana made the move to France in 2016 and has since forced his way into Lyon's first team.

Tottenham Hotspur are closely monitoring the performances of Lyon defender Emanuel Mammana. The centre-half joined the French giants from River Plate in the summer.

Chelsea can have Mammana for £8m

Chelsea are reportedly leading the chase to sign highly-rated River Plate youngster Emanuel Mammana this summer. The 20-year-old has been strongly linked with a move to Stamford Bridge after his agent was spotted in London holding negotiations with the Blues' hierarchy.

Premier League Chelsea are rumoured to be interested in signing River Plate’s central defender Emanuel Mammana this summer for a fee of around £8 million.

Chelsea are weighing up a bid for Napoli star Kalidou Koulibaly despite John Terry signing a contract extension yesterday.