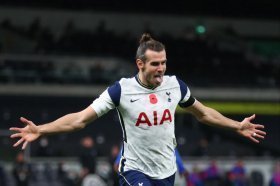 Can Wales still rely on Gareth Bale and Aaron Ramsey?

Fans of the Wales national team have enjoyed some real highs over the last six years or so, with a surprise run to the semi-finals of Euro 2016 — ultimately losing 2-0 to eventual winners Portugal in the last four after knockout victories over Northern Ireland and Belgium — followed by the Red Dragons progressing to the round of 16 at last summer’s European Championships, where they were trashed by Denmark (4-0).

Arsenal have received a big boost in signing Martin Odegaard with Real Madrid prepared to sanction his departure this summer.

Tottenham Hotspur may look to sign Gareth Bale on a permanent basis from Real Madrid following the season-long loan.

Real Madrid are ready to cash in on Vinicius Junior amid the transfer interest from Arsenal and Liverpool.

Tottenham Hotspur have no plans of keeping Gareth Bale at the club beyond the current campaign.

Tottenham Hotspur will be offered the chance to sign Gareth Bale for just £13.4m at the end of the season.

Real Madrid midfielder Luka Modric has ruled out the prospect of returning to Tottenham Hotspur by stating that he is 'too old' to consider a comeback.