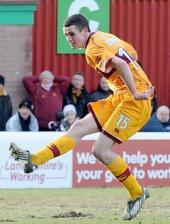 During last summer’s transfer window, Rangers practically took on a whole new squad when ex-boss Pedro Caixinha embarked on a signing spree that brought in 11 new players. He splashed out between £8 million and £10 million to bring them to Ibrox.

Stoke City have been linked with a move for Motherwell striker Jamie Murphy, despite reports of an offer being made already being quickly rejected by the Scottish club.

Motherwell edged John Hughes’ Falkirk side out in a five goal thriller at Fir Park.