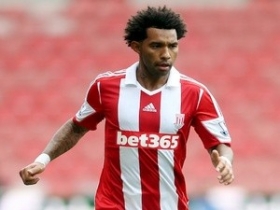 'That's why they struggle' - What pundits have said about Sheffield United this season
after 1-0 defeat to Manchester City Ex-Liverpool winger Jermaine Pennant said not enough was done in the transfer market to secure the
14/11 06:00

Former Arsenal and Liverpool winger Jermaine Pennant has joined Championship strugglers Wigan Athletic until the end of the season.

Jermaine Pennant has signed a new one year deal at Stoke City, despite reports that the player would be released. The controversial winger has been given a heavily incentivised package, based upon his appearances and goals.

Jermaine Pennant has been given a free transfer. The winger is now looking for a new club.

Stoke City manager Tony Pulis will sell winger Jermaine Pennant in the January transfer window if he receives an offer greater than £2 million. The unhappy wing wizard is eager to return to London.

Stoke City winger Jermaine Pennant has no plans to leave the Britannia Stadium despite talk of a move away this month. Pennant is unhappy that he has spent time on the substitutes bench this season.

Jermaine Pennant wnats to see out the remainder of his Stoke City contract, despite rumours of a January transfer window exit. Blackburn are amongst the clubs linked with the former Arsenal and Liverpool winger.

Stoke City are open to offers for right winger Jermaine Pennant, according to reports. The 5m GBP rated winger is free to leave the Potters, who are stepping up their pursuit of Blackburn winger Junior Hoilett.

Stoke City earned a hard fought 1-1 draw with Dinamo Kiev at the Britannia Stadium last night, and a late goal from Kenwyne Jones ensured that the Potters sit at the top of Group E on 11 points ahead of Besiktas who are on 9.

Bolton claimed a decisive win against Stoke City at the Reebok Stadium, courtesy of some dreadful defending by the Potters and clinical finishing by the Wanderers.

Stoke once again showed they are more than just a team of long ball merchants with a convincing 3-0 victory against relegation threatened Wolves at the Britannia Stadium. Manchester City boss Roberto Mancini will have surely glanced an eye over his side's opponents, with just over two weeks to go until the final at Wembley, and the Italian will have seen a Stoke side that are more than capable of causing his team more than problem or two when they do eventually meet.

Jermaine Pennant has completed a move from Liverpool to Portsmouth on loan. It is understood that Tony Adams has included a clause in the deal that could make the contract permanent at any time.

Jermaine Pennant is close to completing a move from Liverpool to Portsmouth, according to reports. Pennant was apparently a target for Real Madrid boss Juande Ramos over the last couple of weeks.

West Ham boss Alan Curbishley is preparing a swoop for Liverpool winger Jermaine Pennant this summer. It is understood that the former Arsenal and Grimsby player is ready to leave Anfield in pursuit of more regular first team football.

Birmingham earned a useful 2-2 draw to remain 18th in the Premiership as the battle for top flight survival really heats up with only two games left. Birmingham, Fulham, Reading and Bolton are all still threatened with the drop.

Newcastle in for Pennant

Kevin Keegan could make a shock move for Liverpool midfielder Jermaine Pennant. The Newcastle boss wants to add some attacking class to his midfield and sees the former Arsenal man as his primary target.

Liverpool hammered a huge nail into the Premiership coffin of Fulham tonight thanks to a 2-0 victory over the Cottagers at Craven Cottage on Saturday afternoon; with goals from Jermaine Pennant and Peter Crouch.

If Fulham ever wanted a chance to get three points over Premiership rivals Liverpool - now would be the perfect time - the Reds sights are firmly focused on the midweek encounter with Chelsea in the Champions League, and Rafa Benitez has decided to rest some of his players.