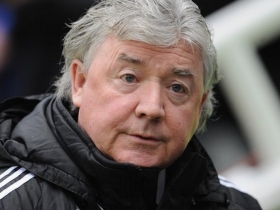 Alan Pardew is fighting to save his job at Newcastle United. The Magpies are currently ninth in the table having lost last four home league games without scoring a goal.

Joe Kinnear resigns as Director of Football at Newcastle United

Joe Kinnear has apparently resigned from his role as Director of Football at Newcastle United.

Paris St Germain manager Laurent Blanc has officially confirmed his long standing interest in French international midfielder Yohan Cabaye. The Newcastle star has been a revelation at St. James' Park this year and has been linked with a £25 million move back to his homeland.

Newcastle defender Steven Taylor, who was this week linked with a transfer to Fulham on loan in January, has instructed his agent to find him a new club that offers more regular first team football.

Newcastle United are tracking Arsenal defender Thomas Vermaelen, with a view of making a transfer offer during the January transfer window, as per The Daily Star.

Ahead of Monday's crucial game between Everton and Newcastle, the Toffees' manager Roberto Martinez has told reporters that Newcastle's quiet summer in the transfer market has proved that you don't need to spend big to succeed.

Pardew wary of losing Cabaye late in the summer

Newcastle United boss Alan Pardew, who saw his side roll to a 1-0 win over Fulham tonight, remains wary of losing his star midfielder Yohan Cabaye late in the transfer window.

Arsenal have been quoted a price for Newcastle's midfielder Yohan Cabaye and the Toon Army's director of football, Joe Kinnear, has told the Gunners they must cough up the cash if they want to sign the talented midfielder before the end of the transfer window.

Sunderland have received enquiries from both Fulham and Newcastle for defender Phil Bardsley. The player has been indefinitely suspended by Paolo Di Canio at the Stadium of Light.

Newcastle and Everton in race to sign James McCarthy

Newcastle and Everton are both in the race to sign Wigan's midfielder James McCarthy. The 22-year-old central midfielder played yesterday during Wigan's first game of the season in the Championship, but the former Hamilton Academical player is expected to quit the Latics before the end of the transfer window.

Fulham have made an improved offer for Aston Villa front man Darren Bent according to Sky sources.

Fulham are reported to be leading the race to sign out of favor Aston Villa striker Darren Bent according to Sky Sports.

Newcastle's manager Alan Pardew is still hopeful that he will be able to sign some new strikers for the coming season. Loic Remy, Darren Bent and Bafetimbi Gomis have all been linked with a move to St. James' Park.

Newcastle United are reportedly ready to ramp up their interest in QPR striker Loic Remy, shortly after pulling out of Bafetimbi Gomis talks. According to the Newcastle Chronicle, the club has intensified its pursuit of Remy in past 24 hours.

Newcastle's major transfer target Bafetimbi Gomis has been sent to play with the Lyon reserves, as the French international striker pushes Lyon to the brink to help him secure a transfer move to the Premier League.

Newcastle to make a move for Sunderland defender Phil Bardsley?

Joe Kinnear, who is the recently appointed Director of football for the Magpies wants to make a move for the Sunderland defender Phil Barsdley who is currently placed on the transfer market by the Black Cats, according to reports in the Sunday Express.

Newcastle United manager Alan Pardew is hoping to add at least one striker to his squad this summer. The coach has admitted he has been busy and locked in conversations with director of football Joe Kinnear regarding a new signing.

Newcastle and Everton go head to head for Rolando signing

Newcastle United and Everton will battle for the signature of Portuguese centre back Rolando, who currently plays for Porto. The 27-year-old is at the top of both the Toon Army and Toffees' shortlists this summer.