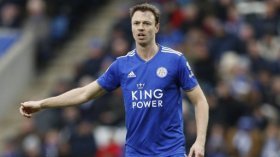 Jonny Evans injury update ahead of Premier League clash with Burnley
next couple of days before deciding if he is ready to start in the Premier League. In Wednesday’s 2-0 Carabao Cup success at Millwall, Evans
23/09 07:00

Manchester United legend Paul Scholes has urged his former club to land the signature of Wesley Fofana from Leicester City.

Manchester United could reportedly make a surprise move to re-sign Jonny Evans from Leicester City during the January transfer window.

The representative of Leicester City defender Caglar Soyuncu has said that the centre-back will remain with the Foxes for the rest of the season before assessing his future.

Leicester City defender Jonny Evans has spoken of his displeasure at not playing regularly for his side so far this season.

Manchester United goalkeeper on the verge of permanent exit

Evans speaks on his move to Leicester City

Leicester City's new signing Jonny Evans has said that he couldn't turn down the opportunity to play for an ambitious club like The Foxes when it came up.

Leicester City are said to have reached an agreement to sign Jonny Evans from West Bromwich Albion in the current transfer window. Arsenal and Manchester City have been linked with the experienced centre-back in the past.

Arsenal look at Napoli defender to shore up the backline

Arsenal are reportedly lining up a summer move for Napoli defender Kalidou Koulibaly as they seek to reinforce their backline ahead of the 2018/19 season.

Manchester United are reportedly considering the option of loaning out Victor Lindelof for the 2018/19 campaign. The Sweden international arrived at Old Trafford last summer with a huge reputation but he has yet to establish himself as a regular in the starting lineup.

West Bromwich Albion defender Jonny Evans is reportedly prepared to snub advances from Arsenal in order to join Manchester City during the summer.

Tottenham Hotspur are reportedly lining up a summer move for West Bromwich Albion defender Jonny Evans, who could be available for just &pound3m.

Arsenal still have their sights on West Brom defender

Arsenal are reportedly to be maintaining their interest in West Bromwich Albion defender Jonny Evans, who could be available on a cut-price deal at the end of the season.

Arsenal have reportedly earmarked Napoli's Kalidou Koulibaly as a potential target to bolster their defence at the end of the current campaign.

Manchester United will demand a minimum fee of at least &pound25m, if they are to part ways with reported Arsenal target Chris Smalling in the summer.

Arsenal manager Arsene Wenger has revealed that the club were not in a position to meet West Bromwich Albion's valuation for Jonny Evans last month.

Arsenal failed with deadline-day move for Serie A defender

Arsenal are reported to have failed with deadline-day move to sign Greek defender Kostas Manolas from AS Roma. The Gunners are said to have revived their interest in the central defender after they had a 'derisory' bid knocked back for West Bromwich Albion's Jonny Evans.