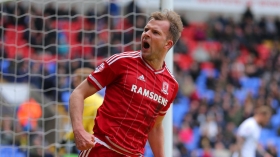 How Garry Monk can unleash the Jordan Rhodes of old at Sheffield Wednesday this season
international Elias Kachunga has joined on a free-transfer following his exit from Huddersfield Town and Josh Windass ...
13/09 14:00

On the 13th of November 2013, Middlesbrough football club appointed the first overseas manager in the club's 141 year history.

Premier League minnows Middlesbrough are reportedly holding out for a &pound10m sum to offload Jordan Rhodes to Aston Villa this month.

Aston Villa will lodge a loan attempt for Jordan Rhodes when the transfer window reopens in the New Year. The Scotland international has struggled to earn a regular run at Middlesbrough this season.

Sunderland will look to tempt Blackburn Rovers into offloading striker Jordan Rhodes on a player-plus-cash deal this summer.

Hull City to wrap up deal for Michael Dawson

Michael Dawson will arrive at Hull City for talks on Monday morning. Tottenham Hotspur and the Tigers agreed a 5 million pounds transfer fee for the centre back.

Blackburn Rovers striker Jordan Rhodes is still being tracked by Hull City manager Steve Bruce. The Tigers are seeking a replacement for Shane Long, who joined Southampton two weeks ago.

Crystal Palace boss Tony Pulis has dismissed speculation insisting that the club are interested in securing the services of Blackburn Rovers striker Jordan Rhodes in the winter transfer window.

New Crystal Palace boss Tony Pulis is reportedly considering making a move for Jordan Rhodes, and is ready to test the resolve at Blackburn Rovers with a £6m bid for the player.

Blackburn Rovers managing director Derek Shaw has insisted that the club are not in any pressure to sell their star striker during the winter transfer window.

West Ham manager Sam Allardyce wants to bring Blackburn striker Jordan Rhodes to the club in the summer. The former Huddersfield striker has been a revelation in the Championship this year.

West Ham manager Sam Allardyce today admitted that a move for Jordan Rhodes before the end of the January transfer window is unlikely. The Hammers have had a 3 million GBP offer rejected by Huddersfield.

Everton manager David Moyes has been tracking the progress of Huddersfield striker Jordan Rhodes for over two months, and could make a move this month for the 4m GBP rated striker.