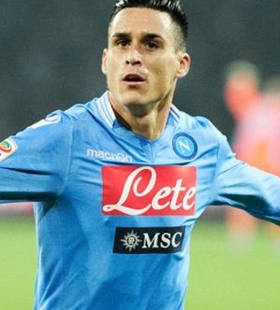 Could Luis Suarez be on his way out of Barcelona?

Luis Suarez is 33 and Barcelona are finding his replacement. Suarez is still capable of offering a high level of football in Europe. If Barcelona decide to cash in on Suarez, he could generate a reasonable fee.

Adam Ounas is set to undergo his Napoli medical tomorrow as the Partenopei wrapped up a deal the Algerian international. The youngster is expected to sign the contract shortly after his medical.

Napoli striker Jose Callejon would be open to the prospect of joining Inter Milan this summer, according to his agent.

Tottenham Hotspur are reported to be interested in signing up Napoli forward Jose Callejon during this summer's transfer window.

Chelsea are reportedly closing in on a deal for Napoli forward Jose Callejon, according to reports.

Napoli striker Jose Callejon is understood to have agreed personal terms over a summer switch to the Emirates.

Atletico Madrid are in negotiations with Napoli over the potential signing of striker Jose Callejon this summer.

Napoli striker Jose Callejon has reportedly turned down an offer from Chelsea and it is rumoured the reason for his rejection is manager Jose Mourinho.

Napoli set to make a bid for Arsenal's Olivier Giroud?

Napoli are looking to add on to Arsenal's misery as the Serie A club are currently preparing a bid for Olivier Giroud. After prising away Gonzalo Higuain from Arsenal, Napoli manager Rafael Benitez is now looking to tempt the Gunners with a high transfer bid to lure their French International striker Giroud away from the Emirates.

Napoli who have already signed the likes of Gonzalo Higuain, Jose Callejon and Raul Albiol from Real Madrid this summer, are still in need of an experienced International forward who could be the perfect foil to Higuain.

According to reports from  Gazzetta dello Sport , Napoli executives are set to meet representatives from the North London Club during the Emirates Cup.

Napoli Is Looking For Another Striker

Napoli boss Rafa Benitez claims that the club is still on the lookout for a new striker. The Spaniard is bent on bringing in another striker of Gonzalo Higuain’s caliber, in order to improve his chances in both Serie A and Champions League.

Amid widespread reports linking Napoli with their prime target Jackson Martinez, the club is reportedly looking to place a bid for Barcelona winger Alexis Sanchez.

Liverpool Striker Luis Suarez Is Back On Real Madrid's Radar

Arsenal target Luis Suarez is back on Real Madrid’s radar as the Spanish club is worried about Tottenham’s determination to hold on to Gareth Bale. The Gunners have been looking to lure the Uruguayan to the Emirates, only without any success.

It is believed that Real Madrid’s Raul Albiol is close to sealing a move to Napoli. The player’s agent, Manolo Quilon, has admitted that the clubs have entered negotiations for his client and he is hopeful of a deal being struck in the next few days.