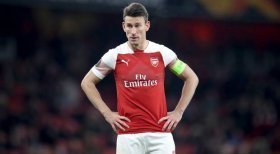 Why former Arsenal captain Laurent Koscielny’s return to France hasn’t gone to plan
Such weird and wonderful events happen in the transfer window. In France, certain players are being ordered to leave before they have even
22/01 09:00

Chelsea striker on his way to Ligue 1 outfit?

Chelsea striker Olivier Giroud could be reunited with former Arsenal teammate Laurent Koscielny at Bordeaux when the transfer window reopens at the turn of the year.

Arsenal midfielder confirms he is struggling with a minor Achilles concern

Arsenal midfielder Granit Xhaka has acknowledged that he has been carrying a knock for the past few weeks but that should not keep him out of first-team action.

Arsenal have officially confirmed that the departure of defender Laurent Koscielny, who has made the return to the French Ligue 1 with Bordeaux.

Bordeaux have had a bid approved by Arsenal to sign defender Laurent Koscielny. The French veteran centre-back will make a move back to Ligue 1 for a transfer fee of around 5 million euros, with the former France international signing a two year contract with his new club.

French duo Bordeaux and Rennes have reportedly open negotiations with Arsenal to secure the signature of wantaway defender Laurent Koscielny.

Celtic defender Kieran Tierney may reportedly miss out on a move to Arsenal this month, considering his injury could keep him out of action for a much lengthier period.

Arsenal are understood to have made an enquiry to sign West Ham United defender Issa Diop during the ongoing summer transfer window.

Arsenal manager Unai Emery has updated reporters on the situation of club captain Laurent Koscielny, who is desperate to leave Emirates in favour of a return to his homeland. The former French international is seeking a free transfer move away from the Gunners, with Rennes, Nice and Bordeaux all linked with the player.

Arsenal are reportedly looking to land the services of defender Daniele Rugani and midfielder Sami Khedira from Juventus before the transfer window closes.

Arsenal captain Laurent Koscielny has reportedly agreed personal terms with French side Rennes as he aims to push through an exit from the Emirates Stadium this summer.

Arsenal to swoop for Senegalese defender?

Arsenal manager Unai Emery has hinted that Laurent Koscielny could head through the exit door while speaking in a press conference in the United States.

Arsenal boss Unai Emery has indicated that Laurent Koscielny continues to remain an important player for the team despite declining to travel with the squad for the pre-season tour.

Arsenal defender Nacho Monreal believes Laurent Koscielny still has a future with the north London side despite refusing to travel with the squad for their pre-season tour.

Arsenal have reportedly joined Manchester United in the race to sign Ruben Dias from Benfica, considering they are bracing for the departure of club-captain Laurent Koscielny.

Arsenal defender Shkodran Mustafi appears to have no desire to part ways with the club despite the criticism from the supporters in the past 12 months.

Arsenal are reportedly holding out for a fee of around £8.8m for defender Laurent Koscielny amid the Frenchman's desire to leave the club.

Laurent Koscielny refuses to travel with Arsenal for pre-season tour

Arsenal captain Laurent Koscielny has declined to join the Gunners for their pre-season tour of the United States as he remains keen on securing a fresh challenge.

Arsenal veteran defender Laurent Koscielny could be leaving the Emirates this summer, as the centre-back considers an offer from France. According to The Mirror, Bordeaux are in the race to sign the Arsenal captain, who has just one year remaining on his deal at the club.

Arsenal are prepared to make a formal approach to land the signature of Wilfried Zaha from Crystal Palace after knowing of the attacker's ambition to join the club.