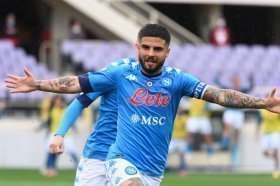 Tottenham Hotspur: Spurs fans react to transfer links with Lorenzo Insigne
glory this summer. The attacker was linked with a move to Tottenham over the summer with rep orts even suggesting at the time that the
18/10 10:15

Chelsea to replace Hakim Ziyech with Serie A star?

Liverpool have made an approach for Wolverhampton Wanderers forward Adama Traore, according to Football Insider.

Hakim Ziyech on his way to Serie A?

Serie A giants Napoli have expressed an interest in signing Chelsea forward Hakim Ziyech during this summer's transfer window.

Liverpool are understood to have recently failed with a bid of around £61m offer to prise away Lorenzo Insigne from Serie A side Napoli.

Liverpool are reportedly weighing up a winter deal for Lorenzo Insigne as they seek to bolster their frontline further to enhance their title prospects.

Liverpool, Arsenal to miss out on Piotr Zielinkski?

Liverpool and Arsenal could be hampered in their pursuit of Napoli midfielder Piotr Zielinski, who appears in line for a new contract with the Serie A club.

Liverpool could be priced out of Lorenzo Insigne pursuit

Liverpool could reportedly be priced out of a winter move for Lorenzo Insigne with Napoli reluctant to accept anything less than £80m for their forward.

Philippe Coutinho handed in a transfer request to Liverpool bosses this week as he tries to force a move to Barcelona. The Anfield club rejected the request and maintain that the Brazilian is going nowhere. However, as Barcelona continue to chase the playmaker, Liverpool have identified a Serie A target to replace him.

Premier League champions Chelsea have made a club-record offer to sign Napoli defender Kalidou Koulibaly in the summer transfer window.

With Eden Hazard yet to commit his future to Chelsea, manager Antonio Conte has already started to plan for life after the Belgian with a £45 million bid for Napoli's Insigne.

Arsenal, Liverpool to lose out on Insigne

Premier League duo Arsenal and Liverpool could drop their interest in Lorenzo Insigne amid his desire to extend his stay at Napoli.

Arsenal have sent scouts to Italy to watch Napoli duo Lorenzo Insigne and Faouzi Ghoulam, with a view to signing the pair in the summer, in an attempt to strengthen their squad and once again challenge in the Premier League.

Arsenal are reportedly monitoring the situation of Napoli ace Lorenzo Insigne. The Italy international has recently snubbed a contract extension with the Serie A outfit.

Napoli forward Lorenzo Insigne is open to the prospect of joining Liverpool in the future. The Italy international has stalled on talks over a fresh deal at Stadio San Paolo.

Arsenal have expressed interest in signing Napoli attacker Lorenzo Insigne, according to the player's agent.

Arsenal are reportedly monitoring the progress of Napoli forward Lozenzo Insigne ahead of the winter transfer window.