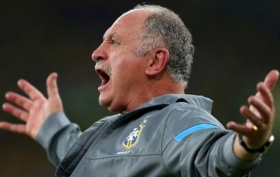 Would you want to play in China?

You often hear professional footballers speak about how they want to play in the English Premier League, or Italy’s Serie A, or even in the Spanish La Liga, but you don’t hear many say…. I can’t wait to play in the Chinese Super League, do you?

Brazilian legend Pele insists new manager Dunga is the right man to rebuild the national side.

"Big Phil" Scolari has stood down as manager of Brazil after a poor showing at the World Cup. Brazil were defeated by Germany 7-1 in the semi-finals, leaving many fans unhappy with their country's performance at the event.

Arsenal are interested in the signing of Brazilian wonderkid Bernard who enjoyed a season of great  progress while playing along with Ronaldinho for Atletico Mineiro.

Luiz Felipe Scolari is in line to become the new Real Madrid boss, according to reports from Spain. The current boss is Manuel Pellegrini, but the Bernebeu giants are looking at bringing in the Brazilian coach.

Luiz Felipe Scolari is the man chosen to replace Gordon Strachan at Celtic, latest reports from sources close to the club say. Strachan who left the club, had recommended Motherwell boss Mark McGhee to be his successor at the Celtic Park.

Scolari to take charge at Benfica?

Ousted Chelsea boss Luiz Felipe Scolari has emerged as a strong favorite to take the Benfica job at the end of the season. Current coach Quique Flores is expected to leave the club in the summer.

Former Chelsea boss Luiz Felipe Scolari has revealed that the club's failure to sign Robinho may have contributed to the fact that his reign at the Bridge was so unsuccessful.

There has been a shock rumour at the eleventh hour that Arsenal could make a move for Chelsea and France international midfielder Florent Malouda.

Wigan boss Steve Bruce has apparently made a move for Chelsea's Slovakian youngster, Miroslav Stoch. Wigan want to sign the young forward on loan until the end of the season.

Didier Drogba is reportedly on the radar of Carlo Ancelotti should Kaka quit AC Milan for a move to the Premiership with Manchester City. Kaka is the subject of a 107 million GBP offer from the Citizens, and Milan could use the funds to sign the Ivory Coast international.

Frank Lampard has backed Luiz Felipe Scolari to remain as the Chelsea head coach, despite a series of poor results. Chelsea limped past Stoke City at Stamford Bridge at the weekend, and Frank Lampard scored the winner deep into injury time in the 2-1 victory.

Fiorentina striker Alberto Gilardino has been linked with a shock move to the Premiership. It is believed that Chelsea are number 1 suitors for the forward's signature, and are ready to offer in the region of 15 million GBP for the player.

Chelsea are apparently ready to make a move for Standard Liege winger Axel Witsel in the January transfer window. Luiz Felipe Scolari is ready to splash the cash for the Belgian international for a fee of around 15 million GBP.

Chelsea are reportedly ready to offload Florent Malouda. It is understood the club are willing to listen to offers for the winger, who has so far unimpressed since joining a couple of seasons ago for 18 million GBP.

Despite an indifferent start to life at Chelsea for Luiz Felipe Scolari, captain John Terry believes Scolari has a lot to be praised for - particularly his man management skills.

Roman will back Chelsea spend

Despite rumours that Chelsea will not be active in the January transfer window, there have been reports that Roman Abramovich has told Luiz Felipe Scolari he will back a move for any 'big player' when the window reopens.

Peter Kenyon has offered his support to Chelsea boss Luiz Felipe Scolari after two quickfire defeats at Stamford Bridge to Arsenal and to Liverpool.