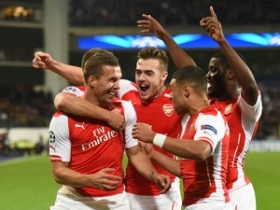 Can Gabriel Jesus lift Arsenal's No 9 curse? From Lucas Perez and Francis Jeffers to Park Chu-young, the Gunners have suffered some huge flops in the famous shirt... but will the Brazilian be a fan favourite like Lukas Podolski?
a £45million move from Manchester City to Arsenal He took just 90 seconds to score his first goal in an Arsenal shirt against Nuremberg on
09/07 11:00

Arsenal have entered the race to sign FC Koln's attacking talent Jan Thielmann in a transfer said to be worth close to 15 million euros. The German under-21 international, who made his first appearance for Koln's first team in 2019, has caught the eye for the German club and Mikel Arteta is ready to beat some of Europe's top sides in securing a coup for the 19-year-old.

Japanese side Vissel Kobe are to make a last ditch effort to sign Barcelona midfielder Andres Iniesta at the end of the season. The player's contract at the Camp Nou will expire and it is widely expected that Iniesta will make a move to Asia; however it is understood that his preferred destination is currently China.

Michael Keane has reportedly decided to pursue a fresh challenge away from Burnley at the end of the current campaign.

Liverpool to step up interest in EPL defender

Liverpool could be willing to make a move for Burnley defender Michael Keane this summer after having been impressed by his performance against Germany in an international friendly.

Premier League leaders Chelsea had sent their scouts to keep a close watch on Roma defender Antonio Rudiger during Germany's 1-0 win over England in an international friendly on Wednesday.

Former Arsenal forward Lukas Podolski has confirmed that he would be leaving Galatasaray for a move to Japanese club Vissel Kobe at the end of the campaign.

Former Arsenal forward Lukas Podolski is reportedly a transfer target for Chinese Super League side Beijing Guoan. The German is currently plying his trade for Galatasaray.