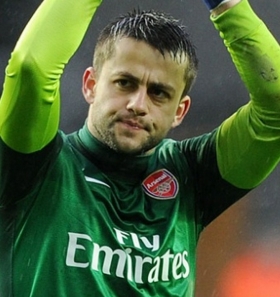 Liverpool flop Loris Karius could be thrown Premier League lifeline by West Ham
West Ham could move for Loris Karius as a back-up to Poland international Lukasz Fabianski. The Liverpool stopper has...
27/03 16:10

Arsenal have been linked with a free transfer move for Spanish goalkeeper Adrian. The former West Ham shotstopper, who has been released from his club in search of regular first-team football, is wanted as a backup goalkeeper for Bernd Leno at the Emirates.

West Ham must snap up Stoke City goalkeeper Jack Butland in January in order to be able to wave goodbye to Adrian in the January window.

West Ham United have secured their seventh signing of the summer transfer window with Felipe Anderson arriving from Lazio on a club-record deal.

West Ham United are on course to secure their sixth signing of the summer transfer window with a deal for Lazio's Felipe Anderson close to completion.

West Ham United have confirmed their fifth capture of the summer transfer window with Andriy Yarmolenko having arrived from Borussia Dortmund on a four-year contract.

Jack Wilshere has reportedly begun a series of medical tests with West Ham United ahead of his expected move to the east London club.

West Ham United are reportedly on the verge of securing the signature of Brazilian forward Felipe Anderson from Serie A side Lazio.

West Ham United are reportedly monitoring the transfer activity at Manchester United as they seek to pursue the services of defender Chris Smalling.

United draw may be enough to keep Swans afloat

Sunday's early kick off saw Manchester United host Swansea City at Old Trafford, with both teams needing three points to attain very different goals. The Red Devils were looking for three points to improve their chances of Champions League football, whereas Swansea were desperate for a win to just stay in the Premier League.

Lukasz Fabianski will be offered a new contract at Swansea City on an improved wage structure.

Serie A giants Roma could swoop for the services of Swansea City goalkeeper Lukasz Fabianski during the summer transfer window.

Swansea manager Gary Monk has revealed that a deal has been agreed with Napoli over the potential transfer of defender Federico Fernandez to the club this summer.

Swansea City have announced the signing of Ecuador winger Jefferson Montero and the sale of Alejandro Pozuelo to La Liga side Rayo Vallecano.

Arsenal are reportedly pursuing Colombia international David Ospina and he is poised to become Arsenal's next signing.

Swansea City have completed the signing of former Lyon star Bafetimbi Gomis on a free transfer.

Mexico goalkeeper Guillermo Ochoa has been linked with a surprise switch to the Premier League, with Arsenal considered his possible destination.

Italian giants AS Roma are expected to make a summer move for Saint-Etienne goalkeeper Stephane Ruffier, according to InsideFutbol.