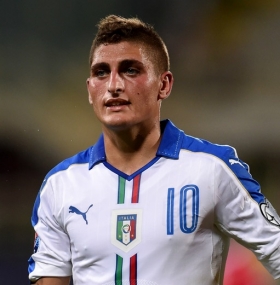 Fernando Henrique scouted as Celtic target Brazilian playmaker with Marco Verratti style
he could be a seriously special talent. Pick up your FREE Panini Official Premier League Trading cards this weekend - Find out how here
21/10 11:47

Chelsea manager Thomas Tuchel has urged the club's hierarchy to land the signature of Marco Verratti this summer.

Manchester United are reportedly plotting a mid-season deal for midfielder Leandro Paredes, who has gone out-of-favour at Paris Saint-Germain this term.

Italian midfielder Marco Verratti has opted to extend his stay with Paris St Germain and signed a new deal until 2024. The defensive midfielder will earn a reported 200,000 euros per week as per the terms of his new contract and will disappoint the likes of Chelsea and Man City, both of whom are long-term admirers of the player.

Over the past couple of days, there have been a number of reports emerging from France regarding Paris Saint-Germain’s interest in Watford’s Abdoulaye Doucoure.

Manchester City are reportedly looking to pursue the signature of Marco Verratti from Paris Saint-Germain this month.

Paris Saint Germain of France have made a cash plus player bid for Manchester United's Paul Pogba, The Sun reports.

Manchester United have reportedly been offered the opportunity to secure the signing of Marco Verratti from Paris Saint-Germain this summer.

Chelsea midfielder N'Golo Kante could be set for a mega-money move to French club PSG. The Ligue 1 champions are expected to make a 75 million euro bid for the Frenchman.

Manchester United are reportedly hopeful of landing the services of Fred within the next couple of days.

Chelsea to compete with Barcelona for 'new Marco Verratti'

Bayer Leverkusen midfielder Atakan Akkaynak has reportedly emerged as a winter target for both Chelsea and Barcelona.

Matuidi has completed his much-anticipated move to Italian champions Juventus after undergoing a medical last night and penning a three-year contract.

In a shocking turn of events, Italian champions and Champions League finalist Juventus have turned their attention to Arsenal's much maligned Jack Wilshere.

PSG are set to frustrate Barcelona yet again, this time for the signature of Nice's combative midfielder Jean Seri.

PSG's Marco Verratti looked to have ended speculation about his future once and for all after confirming that he will be staying at Paris Saint Germain next season.

Ernesto Valverde will reportedly not sign anyone else if Barcelona fail to get Verratti and will put his trust in his current crop of midfielders to do the job.

Barcelona set to miss out on main target

Marco Verratti has become Barcelona's number one transfer target this summer, with the belief of the Catalan giants being that he can add his name to a long list of legendary midfielders. However, his current club PSG are aware of his ability and appear to have no intentions of selling him.

PSG set to edge out Manchester United in race for Fabinho

Manchester United looks set to miss out on yet another target as Fabinho is on the verge of joining PSG.

As a deal for Marco Verratti looks increasingly hard to pull off, Barcelona has made Tottenham's Dele Alli a plan B option, should they fail to get Verratti to the club.