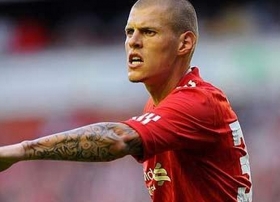 Liverpool could re-sign Martin Skrtel or Stewart Downing to copy Manchester United transfer
's Under-23s side as one of three permitted over-age outfield players in Premier League 2. United aren't the only club to have created this
07/08 09:43

Bournemouth have secured the services of Jordan Ibe from Liverpool for a club-record fee of £15m. The winger has penned a four-year deal with the South Coast outfit.

Roy Hodgson is feeling the heat.  Having strolled through the qualification campaign for Euro 2016, England were handed a favourable draw on paper at the finals in the shape of an ageing Russian side, Wales and Slovakia.

Liverpool centre-back Martin Skrtel is reportedly close to finalizing a summer move to Fenerbahce. The Slovakian has been on the look out for a new club following a frustrating spell under Jurgen Klopp.

Middlesbrough say No to Martin Skrtel

Premier League newcomers Middlesbrough have apparently rejected the chance to sign unsettled Liverpool defender Martin Skrtel. The Slovakian will now head to Turkey with Besiktas close to agreeing terms for his services.

Premier League newcomers Middlesbrough are preparing a £6m bid to sign out-of-favour Liverpool centre-back Martin Skrtel. The Slovakian international is set to leave Anfield after he failed to earn a regular role under Jurgen Klopp.

Turkish giants are considering a summer bid for unsettled Liverpool defender Martin Skrtel. The Slovakian international has had a tough time at Merseyside since the appointment of Jurgen Klopp.

Martin Skrtel is reportedly considering his options after he fell below the pecking order at Liverpool. The Slovakia international has struggled to firm a regular place under Jurgen Klopp, who has utilised the services of Dejan Lovren and Mamadou Sakho for the central defensive partnership.

Liverpool will be without the services of defender Martin Skrtel for six weeks after he pulled his hamstring in the 3-0 defeat at Watford.

France international Mamadou Sakho has ended speculation regarding his future by signing a new long-term deal at Liverpool.

Liverpool have reportedly offered a long-term contract to defender Mamadou Sakho in the quest to ward off interest from potential suitors.

German side Bayer Leverkusen are interested in acquiring the services of defender Mamadou Sakho from Liverpool, according to reports.

Liverpool are reportedly to have knocked back a loan offer from AS Roma for defender Mamadou Sakho.

AS Roma are reportedly keen on acquiring the services of Liverpool defender Mahmadou Sakho.

Slovakian international will sign a new three-year deal with Liverpool on Monday, according to reports.

Martin Skrtel has agreed to extend his stay at Liverpool, having initially termed the contract offer as 'unacceptable'.

Inter Milan are confident of luring Liverpool defender Martin Skrtel to the Serie A this summer, according to an Italian source.

Liverpool are believed to have offered a contract extension to centre-back Martin Skrtel, The Mirror reports.