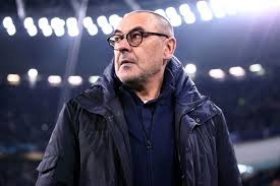 Manchester United-linked Serie A star tipped for move outside of Italy
window, he is once again being touted for a switch to the Premier League. Former Chelsea boss Maurizio Sarri is the current Lazio manager
17/05 19:55

Chelsea are prepared to part ways with goalkeeper Kepa Arrizabalaga in the next transfer window, The Guardian reports.

Serie A giants looking into deal for Chelsea goalkeeper?

Lazio are interested in signing Chelsea goalkeeper Kepa Arrizabalaga, according to Il Messaggero.

Chelsea goalkeeper Kepa Arrizabalaga could make a potential move to Serie A during the January transfer window.

Chelsea goalkeeper Kepa Arrizabalaga has emerged as a loan target for Serie A club Lazio this summer.

Arsenal could reportedly consider the sacking of manager Mikel Arteta, if he fails to guide them to Europa League glory.

Jorginho to be reunited with Maurizio Sarri this summer?

Maurizio Sarri could lure Chelsea midfielder Jorginho back to Napoli, should he take over the managerial reins this summer.

Juventus will explore the possibility of landing Jorginho from Chelsea during this summer's transfer window.

The agent of midfielder Jorginho has opened the door for his client to pursue a fresh challenge away from Chelsea.

Arsenal would reportedly consider Maurizio Sarri for the head coach position, suppose they part ways with Mikel Arteta during the current campaign.

Chelsea star says he was open to joining Arsenal

Chelsea midfielder Jorginho has acknowledged that he was open to the prospect of joining Arsenal during the recent transfer window.

Chelsea midfielder heading to AS Roma?

Chelsea midfielder Jorginho could be heading through the exit door this summer amid the interest from AS Roma.

The agent of Jorginho has said that the midfielder could make the switch to Juventus from Chelsea during the summer transfer window.

Manchester United are continuing to monitoring the progress of midfielder Adrien Rabiot ahead of a potential approach to sign him.

Jorginho speaks on his Chelsea future

Chelsea midfielder Jorginho has said that he is focused on finishing the season on a good note with Chelsea amid the speculation regarding his future.