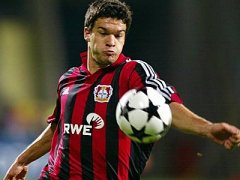 Former Chelsea star Michael Ballack has said that he is not surprised by the early success which Frank Lampard has enjoyed as the Chelsea head coach.

Former Chelsea midfielder Michael Ballack believes Thomas Tuchel will only consider the Blues job, if they are able to finish in the Champions League positions next term.

Bayer Leverkusen have produced some of Germany's best young players in recent times and have brought through yet another wonderkid in midfielder Atakan Akkaynak. The 18-year-old central midfielder, comfortable playing in defensive or offensive positions, is one of the best young players in Germany and has represented the country's under-17's, 18's and 16's sides.

Former Chelsea midfielder Michael Ballack feels Leonardo Bonucci would be an added boost to the Blues' backline, should he make the move to Stamford Bridge.

The momentum has been building for a good few years now. Joachim Low has built a squad that is ready to bring the World Cup back to Germany.

Former German international Michael Ballack has revealed that he is surprised by how Mesut Ozil has been treated in recent weeks.

It was a remarkably strange close season as some of the biggest names in English football called time on their careers; this wasn't just big names on the pitch but also a notable managerial retirement too...

The CEO of Bayer Leverkusen, Wolfgang Holzhauser, has told reporters that Michael Ballack is free to leave the club in search of first team football. Ballack, formerly of Chelsea, has been linked with a return to England.

Bayer Leverkusen have confirmed that Michael Ballack will be free to quit the club this summer. The former Chelsea midfielder has been told that he is no longer needed at the club and the 35-year-old is expected to have talks with other teams this week.

Bayer Leverkusen midfielder Michael Ballack has admitted that he is to quit the BayArena in the summer, once his contract with the club expires. The former German international is expected to receive offers from Greece and Turkey.

Chelsea: Ballack off to Dubai?

Chelsea midfielder Michael Ballack has emerged as a shock target for several Dubai clubs. The midfielder is currently out of contract at Stamford Bridge.

Chelsea midfielder Michael Ballack has praised the excellent spirit in the squad after watching the team go five points clear at the top of the Premiership. Sunday's 1-0 victory over Man Utd did much to inspire and improve confidence as Chelsea look to retain the Premiership crown.

Chelsea are apparently monitoring the progress of promising youngster Axel Witsel. The Belgium international had yet another cracking season for Standard Liege.

Chelsea boss Luiz Felipe Scolari is reportedly interested in signing AC Milan midfielder Andrea Pirlo this January, and could pay up to £20 million for the privilege.

FIFA have released the FIFA World Player 2008 shortlist, and Cristiano Ronaldo is very much at the top of the favorites list.

Robinho will be given his first start in today's game at the City of Manchester Stadium, whilst Luiz Felipe Scolari is set to experience his first trip to Manchester - and against Mark Hughes.

Chelsea midfielder Michael Ballack believes his side are more than capable of achieving the ultimate goal of winning all four trophies - the quadruple - including winning the Champions League.

Germany international midfielder Michael Ballack has revealed for the first time that he would like to stay at Chelsea for the remainder of his career.