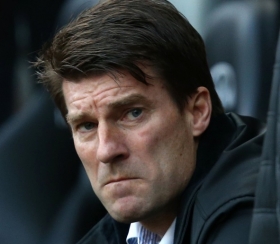 Swansea City headlines as Michael Laudrup makes big Swans statement and Arsenal's Folarin Balogun transfer stance revealed
Gaziantep after a meandering career that has taken in spells at Tottenham, Cardiff, QPR and Liverpool. He was capped once by England in 2012
05/10 14:45

Barcelona have been reportedly in touch with Paris Saint-Germain attacker Angel di Maria ahead of a potential move to Camp Nou in the summer.

Former Swansea City boss Michael Laudrup has been tipped to take over the managerial reigns at West Ham United next season.

Former Swansea manager Michael Laudrup is not keen on taking over the reigns at Queens Park Rangers, according to a report.

Danish manager Michael Laudrup could soon be headed back to the Premier League. The former Swansea City coach is wanted by QPR.

Southampton miss out on Murat Yakin

Southampton's quest to find a replacement for Mauricio Pochettino has suffered a major setback after Murat Yakin, believed my many bookmakers to have been the first option for the Saints, appeared set to move to Spartak Moscow.

Former Swansea City manager Michael Laudrup has sensationally revealed that he was fired by the club via e-mail. The Dane has admitted that he was indeed confused after the club disposed of his services and moved quickly to bring in Garry Monk.

Swansea City's summer signing Wilfried Bony is reportedly keen on leaving the club in the summer, following the sacking of manager Michael Laudrup earlier this week.

Glenn Hoddle has ruled himself out of the race for the managerial vacancy at Swansea City, according to talkSPORT.

Michael Laudrup has planned to take legal action against Swansea City following his sacking from the Welsh Club.