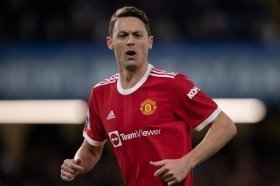 Manchester United manager Erik ten Hag was reportedly keen on keeping Nemanja Matic at the club for another season.

Lille's right-back Mehmet Zeki Celik has agreed a transfer to join Serie A side AS Roma, with the Turkish international set for a dream transfer to Serie A in a deal worth a reported 18 million euros. The former Istanbulspor and Bursaspor player has 32 caps for Turkey to his name.

Manchester United midfielder Nemanja Matic is on the verge of joining Roma on a free transfer, Fabrizio Romano claims.

Manchester United midfielder Juan Mata is reportedly open to continuing his career in the Premier League next season.

Manchester United could be set to replace midfielder Nemanja Matic with fellow countryman Ivan Ilic. The 21-year-old is very highly rated in his home country, and after a wonderful first full season for Hellas Verona in Italy, United scouts have sent glowing reports back to newly appointed manager Erik Ten Hag.

Manchester United midfielder Paul Pogba has agreed terms with Juventus ahead of a Bosman move this summer.

Chelsea are planning to negotiate a new contract with midfielder N'Golo Kante amid the interest from Manchester United.