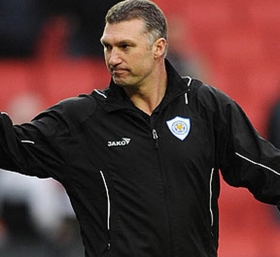 Watford to appoint Vladimir Ivic as new manager on two-year deal
boss after sacking Nigel Pearson before the final two games of the Premier League season. Hayden Mullins was placed in interim ...
13/08 10:58

Former Leicester City and Chelsea boss Claudio Ranieri could make a swift return to English management with Watford in the summer.

With Middlesbrough's relegation back to the Championship confirmed, their focus now turns to next season, as they look for an instant return to the top flight. Current caretaker manager Steve Agnew is expected to step aside, and a former captain of the club has admitted that he would be interested in the role.

Ryan Giggs may take over at Middlesbrough

Manchester United legend Ryan Giggs is on the shortlist to take over as the next permanent manager of Middlesbrough. The Premier League strugglers have been under the temporary management of Steve Agnew since the departure of Aitor Karanka, and look set to be relegated to the Championship in the coming weeks.

Leicester Manager Candidate "Out Of Order"

A former Premier League footballer has accused Leicester City interim manager Craig Shakespeare of being out of order for declaring that he wants to be the next permanent manager at the King Power Stadium.

Following the dismissal of Claudio Ranieri as Leicester City manager yesterday, everybody in the world of football seems to have had their say on the situation, apart from the man himself. This afternoon, the Italian manager released a statement for the first time since his departure.

Claudio Ranieri has sensationally been sacked by Leicester City owners, less than a year after the Foxes won the Premier League title under his management.

Should Ranieri Get Sacked if Leicester Get Relegated?

It’s been a crazy 19 months for Leicester boss Claudio Ranieri.

Leicester City have informed Arsenal that Riyad Mahrez is not for sale at any price this summer, according to reports.

Arsenal have made a €41 million offer for Riyad Mahrez, with the Leicester City winger desperate to join the Gunners, according to reports in France.

Arsenal are set to make a second bid to sign Riyad Mahrez from Leicester City, according to reports.

Leicester City manager Claudio Ranieri has signed a new four year contract to keep him at the club till June 2020.

The Leicester City Fairytale - How Its Happened

Leicester city currently find themselves 5 points clear at the top of the premier league. It is a fairy-tale story that has captivated the imagination of every football fan around the world. With only 7 games to go until the end of the season, they are in a great position to cause one of the biggest shocks world football has ever seen.

Chelsea are rumoured to have contacted Leicester City boss Claudio Ranieri regarding a summer move back to Stamford Bridge. Ranieri has helped the Foxes to second in the Premier League table.

Former Chelsea manager Guus Hiddink has entered the running to take over the managerial reigns at Premier League side Leicester City.

Leicester City want to bring in Arsenal right back Carl Jenkinson on loan. The youngster spent last season on loan with West Ham.

Former Liverpool full back Glen Johnson is in talks with Premier League side Leicester City, following his release from Anfield. Johnson is open to a move to Nigel Pearson's Foxes, according to reports this morning.