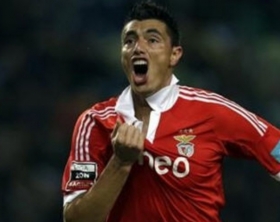 Video: Oscar Cardozo scores outrageous goal of the season contender from inside his own half in Copa Libertadores

Paraguayan international striker Oscar Cardozo is close to wrapping up a deal to join Turkish side Trabzonspor. The club will pay a reported 5.15 million euros for the 31-year-old striker.

Newly promoted Premier League side Leicester City are ready to make a move for Paraguayan forward Oscar Cardozo. The forward is apparently wanted for around 4.5 million Euros.

West Ham manager Sam Allardyce has contacted Benfica regarding their Paraguayan forward Oscar Cardozo. The highly rated forward has been persistently linked with a move to England in the past, and it appears that the Hammers are now in a position to complete a move for the player.

It has been revealed by several media reports that Turkish giants Fenerbahce are closing in on the Benfica striker Oscar Cardozo. According to his agent an agreement may soon be reached.

Premier League giants Man City who have just sold forward Carlos Tevez to Juventus last week are now looking for the perfect replacement and appear to have turned their attentions to Benfica striker Oscar Cardozo.

Benfica and Paraguay international forward Oscar Cardozo has plenty of options should he wish to leave Portugal. It has been reported that Cardozo's agent has been in contact with a number of Premier League clubs.

Benfica Insists No Talks Over Cardozo

S.L. Benfica has denied any level of talks with any club interested in the purchase of their forward Oscar Cardozo. Earlier Fenerbahce was strongly linked with the transfer of the Paraguayan internatonal.

Man of the match Branislav Ivanovic's late goal ensured a dramatic 2-1 win over Benfica in the final of the Europa League last night. Chelsea manager Rafa Benitez has ensured that this will not be a season without a trophy thanks to the epic victory.

QPR could move for Javier Saviola

Newcastle manager Alan Pardew has identified Oscar Cardozo as his top target in the January transfer window, after admitting defeat in his attempts to find a striker this summer.

Newcastle may make an offer for Paraguay international striker Oscar Cardozo, the player Alan Pardew is lining up to replace Andy Carroll. Cardozo; who currently plays for Portuguese giants Benfica, is considered one of the best players in Portugal. A price of £13 million has been suggested.

Arsenal are reportedly tracking Paraguayan international striker Oscar Cardozo, currently at Benfica. If the reports are to be believed, Arsenal will be ready to make a bid for the 15 million rated striker.

Tottenham are still continuing their search for a long term successor to Dimitar Berbatov and a new name has cropped up into the rumour mill; Oscar Cardozo of Benfica has been linked with a move to White Hart Lane.

Benfica have completed the signing of striker Oscar Cardozo’s sporting and federative rights. The Paraguayan player has been in good form the Portuguese side who have decided to take up the option of a permanent purchase.