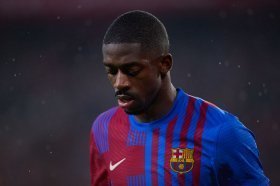 DEM'S THE BREAKS Chelsea transfer blow as Barcelona president confirms new contract talks planned with Ousmane Dembele
... to Stamford Bridge amid his topsy-turvy career at Barcelona. Chelsea have reportedly looked at the former Dortmund attacker among many other ...
16/11 08:07

Chelsea have been handed a potential transfer boost on Barcelona star Ousmane Dembele, according to L'Equipe.

Robert Lewandowski has finally completed his move away from Bayern Munich, joining Spanish giants Barcelona on a long-term deal. Lewandowski will go down as one of the all time greats in the Bundesliga, and his haul of 50 goals in 46 games last campaign helped Bayern win their 10th league title in a row.

Raphinha has completed his dream move from Leeds United to Barcelona, in a deal reported to be worth around 53 million euros. Despite the interest of both Arsenal and Chelsea, the Brazilian forward had his heart set on a move to the Nou Camp and has signed a five year contract with the Spanish giants.

Everton forward Richarlison has reportedly told his close friends that he wants to join Tottenham Hotspur this summer.

Chelsea not giving up on Ousmane Dembele

Chelsea have cooled their interest in signing Ousmane Dembele on a free transfer this summer, according to Sport.

Barcelona attacker Ousmane Dembele is ready to join Chelsea if Thomas Tuchel can assure him with a starting role.

Barcelona attacker Ousmane Dembele has reportedly been tipped to complete a move to Chelsea next month.