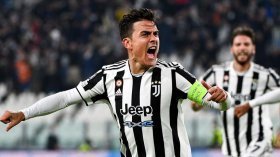 Barcelona could make a surprise attempt to sign Chelsea striker Romelu Lukaku with a deal for Robert Lewandowski uncertain.

Juventus striker Paulo Dybala could turn down Arsenal and Manchester United for a move to Inter Milan.

Man Utd in the hunt for Juventus attacker

Manchester United have joined Arsenal and Tottenham Hotspur in the race to sign Juventus attacker Paulo Dybala this summer.

Chelsea striker Romelu Lukaku is reportedly on the radar of Paris Saint-Germain ahead of the summer transfer window.

Arsenal are mulling whether to make an approach for Juventus forward Paulo Dybala, a report from Corriere dello Sport claims.

Chelsea are reportedly one of the clubs interested in signing Juventus attacker Paulo Dybala during the summer.

Liverpool could reportedly make an approach to sign Paulo Dybala whose contract with Juventus expires this summer.