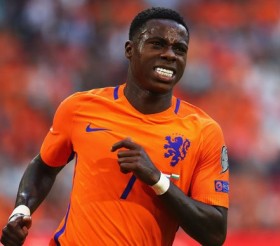 'This rumour every year': Some Reds fans react after being linked with 'useless' player again
Liverpool are said to be interested in signing Quincy Promes from Ajax in the summer transfer window. Liverpool...
13/02 13:00

Liverpool and Chelsea could reportedly battle it out for the services of Quincy Promes from Ajax when the transfer window reopens in the summer.

Quincy Promes, last season's Russian league top goalscorer, has moved from Spartak Moscow to Spanish giants Sevilla in a deal worth a reported 30 million euros. The 26-year-old Dutch-born forward will be an important part of the Sevillista's challenge for Champions League football qualification this season.

Liverpool are planning to make a winter approach to sign Dutch attacker Quincy Promes from Spartak Moscow. The Reds are currently second in the league standings, five points adrift of leaders Chelsea.

Premier League giants Arsenal and Tottenham Hotspur are both in the race to sign Spartak Moscow star Quincy Promes. The 24-year-old is at the top of both North London side's transfer shortlist for a move this summer.