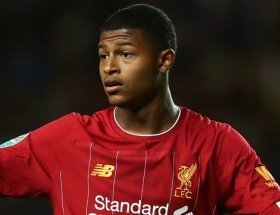 Sheffield United: Rhian Brewster set for injury D-Day
... as a substitute. The England under-21 international, United’s record transfer signing, appeared to be in tears as he made his way off the ...
01/11 09:00

Sheffield United have secured a major coup in the signing of Rhian Brewster from Liverpool this afternoon, with the talented forward penning a contract with the Blades until 2025. Sheff Utd have paid a reported £23.5 million to snap up the striker, who is seen as one of England's best young players.

Liverpool are reportedly close to securing the signature of Diogo Jota from Wolverhampton Wanderers.

Liverpool have approached Barcelona over a potential loan deal for Ousmane Dembele, a report from Sport claims.

Liverpool are prepared to part ways with Rhian Brewster on a permanent basis before the transfer window closes next month.

Liverpool are prepared to part ways with club graduate Rhian Brewster amid interest from the likes of Aston Villa, Newcastle United and Sheffield United.

Championship side Swansea City have reportedly emerged as the leading candidates to sign Rhian Brewster on loan from Liverpool next month.