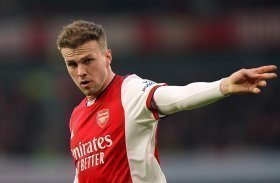 Arsenal could ditch Rob Holding by signing Ivan Fresneda
Gunners attempt to win the Premier League title ahead of the likes of Manchester City and Manchester United . 1 of 20 Arsenal are top at ...
24/01 04:45

Yesterday, Arsenal signed their second player of the January transfer window, bringing in Jakub Kiwior in a 20 million euro deal from Italian side Spezia. Kiwior is a Poland international, and caught the eye of the Gunners' scouts after impressive performances for both club and country.

Arsenal defender Rob Holding has emerged as a surprise target for Aston Villa following a long-term injury for Diego Carlos.

Arsenal could be prepared to part ways with Gabriel Magalhaes if they receive a fee of around £43m this summer.

Arsenal have been offered the chance to sign Borussia Dortmund defender Manuel Akanji, according to The Sun.

Arsenal defender William Saliba is looking forward to pre-season with the club following a successful loan stint at Marseille.

Arsenal manager Mikel Arteta has no plans of losing William Saliba during this summer's transfer window.

Arsenal have been handed a double injury blow with Ben White and Gabriel Magalhaes absent from first-team training on Sunday.