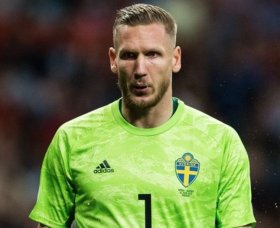 Emiliano Martinez ‘100 per cent’ focused on Aston Villa after World Cup win with Argentina
... was only named on the bench for Villa’s 2-0 victory at Tottenham with Swedish goalkeeper Robin Olsen deputising and keeping a clean sheet.
03/01 13:18

Everton have joined Arsenal in the race to sign Barcelona goalkeeper Neto, a report from Sport claims.

Everton manager Carlo Ancelotti has confirmed that Jordan Pickford will start in goal when the Toffees host Manchester United in the Premier League on Saturday.

Everton are on the verge of agreeing a deal for AS Roma goalkeeper Robin Olsen, with the Swedish international goalkeeper set for a loan deal for Goodison Park. The 30-year-old 6 foot 5 shot stopper will battle with under fire Jordan Pickford for the number 1 jersey for the Toffees.

“It’s just a number,” Mariano Díaz said. But it isn’t. Over on the touchline, the fourth official held up the board.