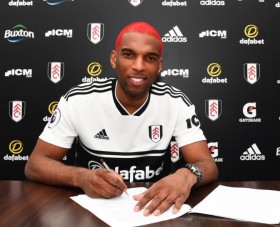 Fulham are ready to make a loan transfer move for Man Utd forward Tahith Chong once the summer window reopens and are confident that they can agree on a contract with the Old Trafford side. The Cottagers, who look set to be relegated to the Championship after just one season in the Premier League, are already planning for life in the English second flight.

Liverpool boss Jurgen Klopp has expressed his delight after the Reds managed to secure a 2-1 triumph over Fulham in the Premier League this afternoon.

Fulham manager Claudio Ranieri is confident that Gary Cahill will eventually become a Cottagers player, despite uncertainty from the player himself. The Chelsea centre-back will be out of contract in the summer.

Fulham have made a move to sign Besiktas forward Ryan Babel yesterday, with the Dutch international returning to the Premier League for the first time since his disappointing spell with Liverpool. Babel joins Premier League strugglers Fulham for an undisclosed fee, believed to be in the region of £8 million.

Swansea City will look to sign former Liverpool forward Ryan Babel this summer, according to The Mail.

Barcelona Loan Bojan To Ajax On A One Year Deal

Barcelona has confirmed loaning out their forward Bojan Krkic to Eredivisie club Ajax on a one year deal. The Spanish club have officially announced this deal on their club website.

Frank de Boer admits that Ajax are very keen on landing the Barcelona forward Bojan Krkic this summer. Boer is hoping to bolster up his attacking front by signing the 22-year-old.

Liverpool coach Rafa Benitez has discussed why he left Ryan Babel on the bench for the game with Stoke City. The Spaniard revealed that there was no bad blood between the two after the discussion.

Dutch winger Ryan Babel looks set to be heading for the Liverpool exit door after a well-publicised bust up with Reds boss Rafa Benitez. It is believed that Babel is on the radar of Sunderland.

Sunderland boss Steve Bruce is understood to have enquired about the availability of Dutch winger Ryan Babel. The player is also being tracked by Birmingham.

Ryan Babel has been linked with a cut price move to Barcelona this summer, according to reports from Spain. The Liverpool forward is unhappy with his bit-part role at Anfield.

Dutch international Ryan Babel looks all set to leave Liverpool in the summer as Rafa Benitez bids to bolster his summer war-chest.

Arsenal boss Arsene Wenger is ready to test Liverpool and make an offer for Holland international forward Ryan Babel in the summer transfer window, should any of his front line be sold.

Liverpool have made a £15m offer for Valencia winger David Silva. Rafael Benitez is keen to sign the 23 year old, but, Valencia are stalling on the offer.

Liverpool's flambouyant winger Ryan Babel is desperate for first-team football and might sign for Wigan Athletic. He was linked with Arsenal a week ago.

Liverpool captain Steven Gerrard got himself injured in the FA Cup clash against Everton. He will be out for three weeks.