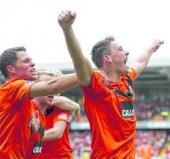 Scott Allan speaks on 2015 Rangers transfer interest and Celtic 'blocking' Hibs return
]. I'd had interest twice before from Rangers – before I went to West Brom [from Dundee United] and again before I went to Hibs...
12/03 13:39

West Brom have finally completed the signing of Scottish under-21 international Scott Allan. Dundee United and WBA reportedly agreed a 0.7m GBP fee for the midfielder.

WBA have reportedly agreed a fee with Dundee United for the signing of Scottish midfielder Scott Allan, and the 20 year old will complete his move to The Hawthorns on January 1st.