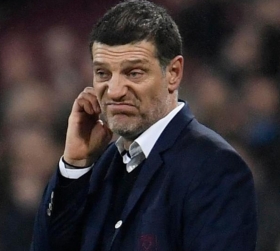 Chris Wilder, Kjetil Knutsen, Slaven Bilic -Clarets candidates and next Burnley manager latest
of work and available meaning he was an obvious option given he has Premier League experience. But at this stage there is no suggestion that
21/04 11:46

West Bromwich Albion are reportedly prepared to compete with Tottenham Hotspur in the race to sign Fenerbahce's Vedat Muriqi.

Marko Arnautovic's brother and representative Danijel has said that the Austrian may consider a fresh challenge from West Ham United when the transfer window reopens.

West Ham United have dismissed Slaven Bilic from his managerial role following the club's dismal start to the 2017/18 season. The east London side are placed 18th in the league standings following the 4-1 defeat to Liverpool, which ultimately cost Bilic his job.

David Moyes is reportedly the leading candidate to takeover the managerial reigns from Slaven Bilic at West Ham United. The Hammers have endured a difficult season under the Croatian, and they currently find themselves just a point above the drop zone.

Slaven Bilic given two games to save his job

West Ham United have reportedly given Slaven Bilic another two games in order to save his managerial post. The Hammers are presently 17th in the table following a damaging 3-0 defeat at home to Brighton & Hove Albion.

West Ham have deployed scouts to monitor the progress of Serbia international centre-back Nikola Maras. The 6 foot 1 defender, who currently plays in Portugal with Chaves, has impressed sufficiently at club level to make the step up to full international honours.

Arsenal midfielder Jack Wilshere is reportedly hopeful of sealing a move to West Ham United during the winter transfer window.