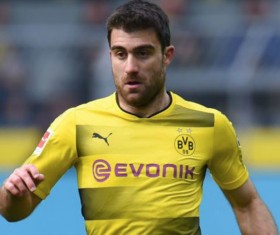 Shakhtar back in action after Russian invasion with last-minute Olympiacos game
we are all in a difficult situation” Olympiacos star and former Arsenal ace Sokratis Papastathopoulos is proud of his team sending a "
10/04 09:32

Lazio are reportedly looking at the possibility of signing Shkodran Mustafi from Arsenal during the current transfer window.

Arsenal defender Sokratis Papastathopoulos is prepared to snub advances from Genoa in order to join Real Betis this month.

Mikel Arteta speaks on the positions of Mesut Ozil and Sokratis

Arsenal manager Mikel Arteta has said that it was a tough decision to leave out Mesut Ozil and Sokratis Papastathopoulos from the club's Europa League squad for the group stage.

Mesut Ozil and Sokratis Papastathopoulos have been left out of the Arsenal squad for the group stage of the Europa League.

Napoli president Aurelio De Laurentiis has confirmed that the club are considering a move for Sokratis Papastathopoulos from Arsenal.

Paris Saint-Germain have reportedly been offered the chance to sign Hector Bellerin from Arsenal during the current transfer window.

Arsenal could offload as many as four defenders following the arrival of Gabriel Magalhaes from Lille this summer.

Napoli want Arsenal defender if they miss out on Gabriel

Napoli could reportedly focus on signing Sokratis Papastathopoulos from Arsenal, should they miss out on the services of Gabriel Magalhaes.

Arsenal have opened the door for Sokratis Papastathopoulos to leave the club after falling out-of-favour under Mikel Arteta.

Arsenal have reportedly approached the representatives of Malang Sarr regarding a potential free transfer for the defender.

Arsenal could reportedly sanction the exits of Shkodran Mustafi and Sokratis Papastathopoulos when the transfer window reopens.

Arsenal defender David Luiz is keen on extending his contract for at least another year, a report from The Athletic claims.

Arsenal manager Mikel Arteta could reportedly sanction the departure of five first-team players during the next transfer window.

Arsenal defender Sokratis Papastathopoulos has hinted that he could head through the exit door this summer, suppose he is not guaranteed with regular first-team football.

Arsenal face Chelsea at Stamford Bridge in tonight's Premier League encounter. The Gunners are currently 10 points behind fourth-placed Chelsea in the standings and they have a good chance of closing the gap to enhance their Champions League prospects.

Arsenal will make the trip to the Vitality Stadium to face Bournemouth in the Boxing Day Premier League clash. The Gunners have picked up just one victory in the past 10 league games but new boss Mikel Arteta will be aiming for a strong start on his managerial debut.

Arsenal will be aiming to register their first Premier League win since the international break when they entertain Wolverhampton Wanderers at the Emirates Stadium on Saturday.

Arsenal will be aiming to return to winning ways in the Premier League when they tackle Crystal Palace at the Emirates Stadium on Sunday.