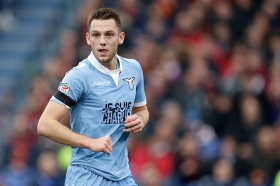 Arsenal have been handed a boost in signing Lautaro Martinez as he is assessing his future at Inter Milan.

Premier League duo Liverpool and Manchester United have reportedly missed out on the signature of Stefan de Vrij, who has decided to stay put in the Serie A next season.

Dutch centre-back Stefan de Vrij has reportedly set his sights on joining Manchester United when his contract with Lazio expires at the end of the season.

Manchester United and Chelsea have reportedly joined the pursuit of Lazio defender Stefan de Vrij. The Netherlands international is also of interest to Liverpool despite the signing of compatriot Virgil van Dijk last month.

Southampton centre-back Virgil van Dijk has hinted that he could pursue a fresh challenge away from St.Mary's in the New Year after his failed move to Liverpool in the summer.

Liverpool are reportedly in a three-way race to sign Lazio defender Stefan de Vrij. The Netherlands international has just nine months left on his existing deal, and talks over an extension are said to have stalled.

Lazio defender Stefan de Vrij has emerged as a potential option to bolster the Manchester United defence during the summer transfer window.

Chelsea target Kalidou Koulibaly has extended his contract with Napoli, tying him to the Serie A club until 2012, according to reports in Italy.

Chelsea reportedly remain in the hunt for Lazio's Stefan di Vrij as they seek a potential replacement for veteran defender John Terry. Blues boss Antonio Conte wants an additional centre-half in his ranks despite re-signing David Luiz from Paris Saint-Germain in the summer.

Chelsea had €50m bid rejected for Serie A defender

Napoli rejected a €50 million offer for Senegal international defender Kalidou Koulibaly this summer from Chelsea, according to reports.

Chelsea have agreed personal terms with three players from Serie A, according to reports in Italy.

Chelsea have had a bid of €27 million accepted by Fiorentina for Spanish full-back Marcos Alonso, according to reports in Italy.

Chelsea have switched their focus to Lazio's Stefan de Vrij after they failed in their attempts to land prior targets. Blues boss Antonio Conte wants to add a new centre-back to his ranks before the transfer deadline.

Chelsea have switched their focus to Lazio's Stefan de Vrij after they failed in their pursuit of Kalidou Koulibaly. Blues boss Antonio Conte is keen on recruiting a new centre-half ahead of the upcoming campaign.

Manchester United have reportedly made a bid of £18.9m for Dutch defender Stefan de Vrij.

Manchester United transfer target Stefan de Vrij has reportedly arrived in Rome to undergo a medical and complete his switch from Feyenoord to Lazio. The Italian club confirmed yesterday that they have reached an agreement with Feyenoord over the Dutch defender.