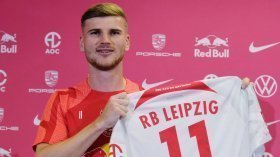 Chelsea are reportedly front-runners to land RB Leipzig defender Josko Gvardiol at the end of the campaign.

RB Leipzig striker Timo Werner has been ruled out of the World Cup after sustaining an ankle ligament injury on Wednesday.

Chelsea attacker Christian Pulisic has said that he is prepared to fight for his Blues future following the change of manager.

Chelsea attacker Christian Pulisic has suffered an injury in training with the United States.

Chelsea will return for Bundesliga ace in January