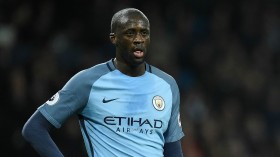 Arsenal news: Gabriel Martinelli silences ‘consistency’ claim as decision made on ‘next Yaya Toure’
... club. "Personally I would put Arsenal just behind Manchester City," the Frenchman told BeIN Sports . "Arsenal are the second best team to ...
06/10 02:00

Former Manchester City star Yaya Toure is reportedly keen on pursuing a Premier League return after terminating his contract with Greek side Olympiacos earlier in the week.

Former Manchester City midfielder Yaya Toure has made a free transfer move to his former club, Olympiacos. The Ivory Coast international played 20 times for the Greek side in 2006 and has signed a two year deal with the club, who finished third in the Greek Super League last season and are looking to improve on their disappointing campaign last time around.

Barcelona are reported to have snubbed the opportunity to re-sign Yaya Toure during the ongoing transfer window.

Sergej Milinkovic-Savic reveals a Manchester United player as his idol

Napoli president Aurelio De Laurentiis has confirmed that his side has snubbed a transfer bid from Manchester City for leading midfielder Jorginho.

West Ham United have reportedly pulled out of the race to sign midfielder Yaya Toure during this summer's transfer window.

Manchester City have reportedly earmarked Chelsea winger Eden Hazard as a potential target to bolster their wider positions during the summer.

Ivory Coast international Yaya Toure is reportedly keen on remaining in the Premier League once his contract with Manchester City expires in the summer.