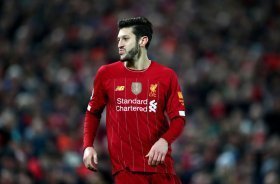 Adam Lallana opens up on Liverpool regret as he sends exciting message to Brighton fans
the fans," he told Brighton's website. "I left Liverpool as a Premier League winner, but we did it in an empty stadium – something didn’t
24/08 15:46

Brighton & Hove Albion are reportedly regarded as the favourites to land the signature of Adam Lallana once his contract with Liverpool expires this month.

Liverpool are prepared to part ways with three first-team stars at the end of the current campaign.

Leicester City are reportedly close to reaching a verbal agreement to sign Adam Lallana when his contract with Liverpool expires during the summer.

Newcastle United have identified Liverpool winger Xherdan Shaqiri as a potential target when the transfer window reopens during the summer.

Leicester City are reportedly leading the likes of Arsenal and Everton in the race to sign Adam Lallana at the end of the season.

Liverpool in talks with French midfielder?

Liverpool are reportedly in contact with the agent of Boubakary Soumare regarding a summer move for the French midfielder.

Liverpool are reportedly prepared to compete with Arsenal in the pursuit of Bournemouth winger Ryan Fraser.

Former Liverpool star Emile Heskey believes the Reds should recruit the services of Timo Werner from RB Leipzig during the summer transfer window.

Liverpool are reportedly leading the likes of Chelsea and Manchester United in the race to sign Boubakary Soumare from Lille this summer.

Liverpool are reportedly set to compete with Arsenal in the race to sign Thomas Partey from Atletico Madrid this summer.

Liverpool have reportedly earmarked Norwich City midfielder Todd Cantwell as a potential replacement for Adam Lallana at the end of the season.

Leicester City have reportedly contacted the representatives of Liverpool midfielder Adam Lallana regarding a possible free transfer at the end of the season.

Barcelona have reportedly told Philippe Coutinho that he is free to leave the club on a permanent basis this summer, provided any club meets their £77m price tag.

Liverpool have no plans of extending the contract of midfielder Adam Lallana beyond the ongoing campaign.

Tottenham Hotspur and Arsenal are both monitoring the situation of Liverpool midfielder Adam Lallana ahead of a summer move for his signature.

Paris St Germain are ready to make a surprise move for Liverpool attacker Adam Lallana in the January transfer window, with a reported bid of £15 million being weighed up by the French giants. Lallana has found himself on the sidelines at Anfield in recent seasons.

Liverpool manager Jurgen Klopp has said that he was surprised that Marcus Rashford's goal was not overruled by the VAR during his side's 1-1 draw against Manchester United on Sunday.

Liverpool have reportedly joined the likes of Arsenal and Tottenham Hotspur in the race to sign Ryan Fraser from Bournemouth this summer.

Liverpool make the trip to the Allianz Arena to face Bayern Munich in the second leg of the Champions League round of 16 stage.

Rabiot closing in on a new PSG deal amid Liverpool rumours

According to Calcio Mercato, Liverpool target Adrien Rabiot is getting closer to signing a new deal at PSG. The French midfielder has been linked to Liverpool for some time now, but it looks like he could be staying at the current Ligue 1 Champions for some years to come.