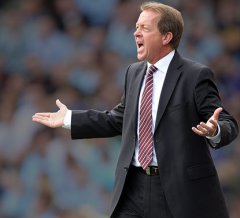 What next for David Moyes?

Another door closes for David Moyes.  With the appointment of Brendan Rodgers at Celtic Park, another managerial vacancy has come and gone for the experienced Scotsman with a proven pedigree in the English Premier League.  Whether he was truly in contention for the role, or indeed interested in taking the reigns at Parkhead, the fact remains that whilst Rodgers is stepping back on the horse, Moyes is still waiting for the opportunity to test himself again in management.

Fulham assistant manager Alan Curbishley will face the wrath of owner Shahid Khan this weekend as the Cottagers' newly installed coach Felix Magath looks set to build his own, new management team.Curbishley had been brought in to Craven Cottage with bundles of experience and the club had hopes his prior relegation saving spells at Charlton and West Ham would help Fulham in their search for survival.

Former Charlton and West Ham manager Alan Curbishley has joined Fulham as a technical director. It has been five years since Curbishley last had a role in professional football.

Wolves chief executive Jez Moxey has confirmed today that the club have been in talks with several managers regarding the Molineux manager's job, but has yet to decide who will be the best candidate for the role.

The favourite to win the vacant Wolverhampton Wanderers managerial job, Alan Curbishley, has admitted that he is ready to listen to any offers from club chairman Steve Morgan.

Avram Grant is the hot favourite in the betting markets to replace sacked Portsmouth boss Tony Adams. It is understood that Joe Jordan has also been linked as a shock replacement for Adams.

Newcastle are reportedly considering Alan Curbishley. The former West Ham United boss is apparently interested in the role himself, and eager to get back in to Premiership football.

Alan Curbishley has sensationally lifted the lid on the goings-on at West Ham United, and revealed that the signing and sale of certain players made his position as manager at the Hammers difficult to continue with.

Zola signs on at West Ham

West Ham United have confirmed that Gianfranco Zola has signed a three year deal at Upton Park, worth an estimated £4.5 million. Zola had been the hot favorite for the role since the departure of Alan Curbishley, and has been installed in time for this weekend's game against West Brom.

Zola to get West Ham job

Italy and Chelsea legend Gianfranco Zola is set to be named as the replacement for Alan Curbishley as coach of West Ham United. Zola has been the favorite for the job for over a week, and the Hammers have offered Zola a 3 year deal.

West Ham United club director Mike Lee has admitted that Roberto Donadoni and Gianfranco Zola are both high on his list for replacements for Alan Curbishley, and the club are hoping to have the vacant role filled by the next game.

It is understood that Gianfranco Zola is top of the list to take charge of West Ham United. After Alan Curbishley's departure from Upton Park last week, several names have been mooted as possible replacements - but Chelsea legend Zola looks to be the favorite.

England under 21 boss Stuart Pearce has pulled himself out of the running to be Alan Curbishley's replacement at West Ham. The former Man City coach has been one of the hotly tipped favorites for the vacant role.

West Ham have been linked with a shock move for former boss Harry Redknapp. Redknapp is currently in charge at Portsmouth, but the Hammers are considering a shock move for their former coach.

Lucas Neill will not be leaving West Ham to join Turkish champions Galatasaray. There were reports that Neill was considering linking up with Australian international team mate Harry Kewell, who joined Gala from Liverpool last week.

West Ham boss Alan Curbishley is preparing a swoop for Liverpool winger Jermaine Pennant this summer. It is understood that the former Arsenal and Grimsby player is ready to leave Anfield in pursuit of more regular first team football.

West Ham back for Shorey

West Ham are reportedly back in the market for Reading defender Nicky Shorey. The England international right back has been looking to leave the Royals' since they were relegated to the Championship.

According to reports, Anton Ferdinand will be leaving West Ham United this summer after the club placed the player on the transfer list. According to the Mirror, the talented defender is heading for the exit door.

Luis Boa Morte has admitted he is likely to sit down with Alan Curbishley soon and discuss his future at West Ham; and the Portuguese midfielder is reportedly looking to leave the club after becoming angry with the treatment received by the Hammers' supporters.