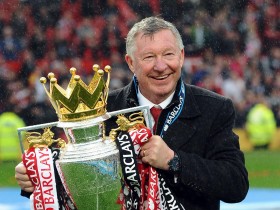 Borussia Dortmund youngster Jude Bellingham has revealed that the desire to play regular first-team football contributed to the decision to join the German side instead of Manchester United.

Jude Bellingham chooses his next club?

Birmingham City starlet Jude Bellingham has reportedly chosen to make the move to Borussia Dortmund despite the concrete interest from Manchester United.

Manchester United to miss out on midfield starlet?

Manchester United are reportedly set to miss out on signing Jude Bellingham from Birmingham City during this summer's transfer window.

Manchester United are still leading the race to sign midfielder Jude Bellingham from Birmingham City during the next transfer window.

Premier League: Where is Manchester United going to finish?

The retirement of Sir Alex Ferguson in 2013 has had a predictably tumultuous effect on Manchester United. Replacing such a legendary figure was bound to be a tough task, but nobody could have predicted the fast turnover of new managers and the struggles that have been witnessed at Old Trafford.

Manchester United club legend Gary Neville has hit out at the club's board and specifically director Ed Woodward for the team's failings on the transfer market in recent seasons. A number of high profile poor signings have cost United dearly, and it appears as if this transfer window they have again missed out on another gem.

According to The Sun, Premier League giants Manchester United reportedly want to re-sign one of their former players in a deal that could reach £70 million.

Could Solskjaer be sacked by Christmas?

There is a lot of Manchester United fans that have predicted that their current manager, Ole Gunnar Solskjaer, will follow in the footsteps of former boss Jose Mourinho and will be sacked before Christmas! This has come to a shock by one half of United fans who think that continuously sacking managers after a few months of bad form is not the way forward and certainly should not be the United way, despite it being the only way Manchester United have been with their managers since sacking David Moyes.

Sir Alex Ferguson has reportedly urged Manchester United to fasten negotiations with Leicester City for the services of Harry Maguire.

Sir Alex Ferguson has reportedly urged the Manchester United hierarchy to secure the services of Harry Maguire from Leicester City this summer.

Real Madrid are reportedly prepared to offer Isco as a makeweight in a player-plus-cash move for Manchester United midfielder Paul Pogba.

The football season is reaching its climax and has delivered all sorts of high drama for footie fans. The Premier League has been more exciting than ever before, the Champions League has witnessed some major giant killings and the Bundesliga is throwing a few curveballs into the title race for the top two contenders. Below is a quick look at each league and a prediction of who might lift the title.

Manchester United could make a summer approach to sign Raphael Varane from Real Madrid amid suggestions that the European champions may make the Frenchman available in the transfer market.

Chelsea manager has said that he is more worried about the results in the aftermath of the Blues' disappointing 2-0 defeat to Manchester United in the FA Cup fifth round.

Manchester United are reportedly on the cusp of offloading midfielder Marouane Fellaini after accepting a fee of around &pound10m from Chinese club Shandong Luneng.

Manchester United attacking midfielder Juan Mata has revealed in his weekly blog on Monday that it is great news that Sir Alex Ferguson returned to Old Trafford when Jose Mourinho's side faced Wolverhampton Wanderers over the weekend.

Mourinho has lost patience with a United forward

Manchester United manager has lost patience with forward Anthony Martial over his poor performances, according to the Express.