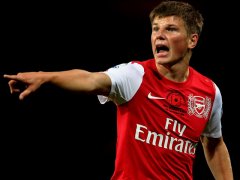 According to a report in the Mail on Sunday, Arsenal are about to make a club record bid for Real Madrid's wantaway striker Gonzalo Higuain. The talented Argentine wants to quit the Spanish club in favour of pastures new.

Arsenal have decided not to offer Denilson, Andrei Arshavin and Sebastien Squillaci new deals, and the players are free to leave the Emirates. The Gunners decided against renewing their contracts.

Arsene Wenger's scouting network has been monitoring young French midfielder Gilbert Imbula. The Guingamp player is highly rated and could be available for around 4 million Euros this summer.

West Ham manager Sam Allardyce wants to give Andrei Arshavin another crack at the Premier League. According to a report, West Ham will offer the Arsenal man a one year contract at Upton Park.

Reading manager Bryan McDermott has ruled out a move for Arsenal's wantaway winger Andrei Arshavin. The Russian international has been linked with a move away from the Emirates for over a year.

Arsenal have told Russian winger Andrei Arshavin that he is free to quit the Emirates and join London rivals Fulham on loan for six months. The former Zenit player had been linked with a return home, but is apparently very happy in London.

Arsene Wenger is planning a busy summer of transfer activity, as he plans to sell many of the fringe players at the Emirates. Names that are included in this batch are believed to include Marouane Chamakh, Andrei Arshavin, Denilson, Nicklas Bendtner, Carlos Vela, Manuel Almunia and Sebastien Squillaci.

Russia international captain Andrei Arshavin has reportedly turned down a return to his homeland, despite the interest of ambitious Anzhi Makhachkala. According to reports, Anzhi had offered 8.5 million for the out of form winger.

Russian side Anzhi Makhachkala are understood to have opened talks with Arsenal for the signing of international captain Andrei Arshavin. According to reports, the player wants to stay in England but the Gunners are ready to listen to any offers.

Arsenal forward Robin van Persie adamantly denied that he has had a rift with manager Arsene Wenger, and the Dutch striker insisted that he respects every decision that his manager makes.

Arsenal manager Arsene Wenger has been backed by his number 1 goalkeeper Wojcech Szczesny today, after the French boss faced a supporter backlash after the defeat to Manchester United last Sunday.

Arsenal manager Arsene Wenger defended his decision to substitute impressive young winger Alex Oxlade-Chamberlain during last night's 2-1 defeat to Manchester United at the Emirates. Gunners fans were left fuming as the Frenchman replaced the dangerous winger with Andrei Arshavin; as 'The Ox' had assisted Robin van Persie for the equaliser just minutes before being substituted.

Arsenal manager Arsene Wenger has no plans to sell Russian international midfielder Andrei Arshavin, despite the player reportedly telling his agent that he wants to leave the Emirates for a move back to his homeland.

Zenit St. Petersberg are leading the race for Arsenal winger Andrei Arshavin's signature. The Russian's former club will make a 9m GBP offer for the winger this month.

Russian international captain Andrei Arshavin has reportedly been told that he is free to leave the Emirates this month. Several big clubs are expected to express an interest in the former Zenit player, with Anzhi believed to be the favorites to land the 12m rated player.

Manchester United are reportedly planning a Russian raid on CSKA Moscow, with a 20m GBP signing of 21 year old midfielder Alan Dzagoev. The talented creative midfielder is considered the finest Russian footballer of his generation.

Arsenal manager Arsene Wenger wants to bring Spanish midfielder Jonathan Viera to the Emirates in January. The 22 year old attacking midfielder currently plays for Segunda Division side Las Palmas; and is expected to quit the club this year.

A stunning strike from Robin van Persie marked the striker's 33rd goal of 2011, and gave Arsenal an important 1-0 victory over Everton at the Emirates. Arsenal dominated for most of the game but could not take the advantage, and RVP would again be required to seal the poitns for the Gunners.

Arsenal winger Andrei Arshavin looks set to quit the Emirates in the January transfer window, as the Gunners have reportedly an enquiry regarding the Russian international's availability from Anzhi.

Arsenal winger Andrei Arshavin will be allowed to leave the club in January, with Anzhi, Bayer Leverkusen and former club Zenit all interested in the Russian. The Gunners are willing to part with Andrei for around 7.5m GBP.