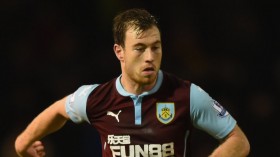 England international Harry Kane has said that Tottenham Hotspur still have the chance of challenging for the Premier League crown despite a shock 2-1 defeat at Burnley over the weekend.

Antonio Conte has hailed Chelsea's 'fantastic spirit' as they secured a 2-1 triumph over Burnley in the Premier League on Thursday night.

Premier League holders Chelsea have been linked with a surprise swoop for Burnley striker Ashley Barnes as they look to recruit a tall targetman in their ranks.

Newcastle United have made a bid to sign Burnley's out-of-favour forward Ashley Barnes. The 27-year-old is wanted by Rafa Benitez, who has been frustrated on the transfer market this summer and hopes to bring in at least three new players before the transfer window closes.

Burnley prepared to cash in on Andre Gray

Burnley will be willing to listen to offers for striker Andre Gray when the transfer reopens in less than two months' time. The 25-year-old has just a year left on his previous deal at Turf Moor.

Liverpool win to keep pace with Spurs and City

Liverpool had to come from behind at Anfield on Sunday, as they beat Burnley 2-1, to stay fourth in the Premier League, and remain within touching distance of Tottenham Hotspur and Manchester City. These are the type of matches that Liverpool have struggled with this season, and were determined to grind out a victory.