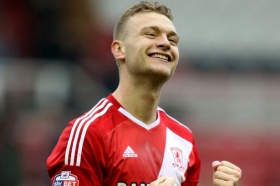 Burnley have completed the £3.5m transfer of Manchester City goalkeeper Joe Hart, according to Sky Sports. The player has agreed a two-year deal with an option to increase it by an additional year.

Wolverhampton Wanderers are reportedly on the verge of signing Adama Traore from Middlesbrough after agreeing on a club-record fee for his services.

Ben Gibson has completed a club record transfer from Middlesbrough to Burnley. The talented centre-back has made a &pound15 million move to the Premier League club as the player seeks international recognition and hopes for a chance to play for England's full national team.

Burnley are on the cusp of agreeing a move to sign Middlesbrough defender Ben Gibson in a deal worth a reported £15 million. The highly rated centre-back has only just signed a new contract with Boro, but has decided that his long-term future should be with Premier League side Burnley instead, with negotiations set to complete tomorrow afternoon.

New Everton manager Marco Silva has reportedly earmarked Ashley Williams as one of the players, who will be shown the exit door during the summer transfer window.

Everton have reportedly set their sights on securing the signature of Middlesbrough defender Ben Gibson after ending their interest in Newcastle United's Jamaal Lascelles.

After their captain Virgil van Dijk handed in a transfer request yesterday in an attempt to force a move away from the club, Southampton have wasted no time in identifying who they want to replace the Dutch defender.

West Bromwich Albion have had a bid for Middlesbrough defender Ben Gibson rejected as the recently relegated club look to get the highest price that they possibly can. The bid from The Baggies would have seen him become the club's most expensive signing ever.

Stoke City have lodged an opening £12m offer in order to pursue the services of Middlesbrough defender Ben Gibson this summer.

Ben Gibson back on Liverpool's radar after Van Dijk disappointment

Liverpool will reportedly revive their pursuit of Middlesbrough defender Ben Gibson after dropping their interest in prior target Virgil van Dijk.

Arsenal boss Arsene Wenger is reportedly interested in signing both Riyad Mahrez and Ben Gibson ahead of this summer's transfer window.

Ben Gibson could reportedly snub advances from the likes of Chelsea and Liverpool in order to stay put at Middlesbrough next season.

West Bromwich Albion Tony Pulis could move in for the services of Middlesbrough defender Ben Gibson after having watched him in action during Boro's 3-0 defeat at the hands of Chelsea.

Despite a difficult return to the Premier League, one positive note for Middlesbrough has been the form of defender Ben Gibson. The young English defender is very much on the radar of the international scene now, and looks certain to leave the club if they are relegated at the end of the season.