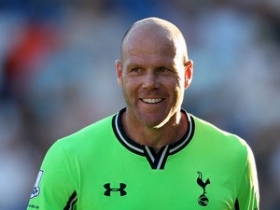 Every Premier League club’s best free transfer ever as Lingard and Dembele touted around
his daughters. TOTTENHAM: Brad Friedel Free. Actually free. It was at Tottenham that Friedel’s run of 310 consecutive Premier League games
02/07 09:19

Shay Given on Chelsea radar

Aston Villa goalkeeper Shay Given has emerged as a summer target for Chelsea, The Telegraph reports.

Vorm being chased by Tottenham

Tottenham Hotspur are closing in on the signing of Swansea City goalkeeper Michel Vorm, according to Sky Sports.

French giants AS Monaco are reportedly eager to secure the services of Tottenham Hotspur shot-stopper Hugo Lloris in the summer transfer window.

Tottenham's Brazilian goalkeeper Heurelho Gomes will make a move to Championship side Leeds United on a loan deal. The 33-year-old is third choice goalkeeper at White Hart Lane.

Tottenham Hotspur are understood to be readying a surprise move for Blackpool goalkeeper Matt Gilks in the summer.

Tottenham Hotspur's out-of-favour goalkeeper Heurelho Gomes has admitted that he would prefer a switch back to his home country, when his contract expires with the North London outfit next summer.

Heurelho Gomes has no plans to swap Tottenham for a move to his former club PSV Eindhoven. The Brazilian keeper is rumoured to have been linked with a move back to the Netherlands.