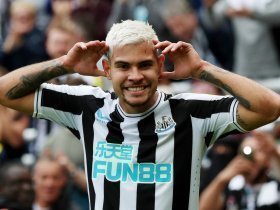 Report: Rapid Brazilian star recommended to Newcastle United, same agent as Bruno Guimaraes
... he stands at just 5ft 5in tall – which some may consider small for the Premier League. This isn’t the first time Dodo has been linked with ...
05/12 20:35

Chelsea have identified multiple midfield targets ahead of the winter transfer window, according to Simon Phillips.

Arsenal could reportedly battle it out with Newcastle United to sign Lyon playmaker Lucas Paqueta this summer.

Arsenal are set to face competition from Brentford in the race to sign Bologna left-back Aaron Hickey, Daily Mail claims.

Newcastle have completed a £40 million transfer move for Lyon midfielder Bruno Guimaraes. The talented Brazilian wrapped up his medical on Sunday morning, and was officially presented to the media as a Newcastle player later in the afternoon.

Arsenal continue to remain interested in signing Bruno Guimaraes despite the speculation linking him with Newcastle United.