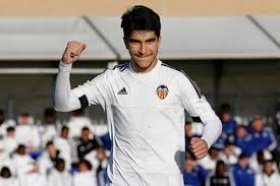 Valencia’s Carlos Soler could be a possible replacement for Barcelona as Frenkie de Jong nears exit: Reports
As per reports, Manchester United and Barcelona have finally found some middle ground in the transfer of Frenkie de Jong. The Catalan club
28/06 14:31

Arsenal to swoop for Valencia playmaker?

Arsenal could attempt to land the signature of Carlos Soler from Valencia during the ongoing transfer window.

Spanish giants Valencia are reportedly reluctant to lose midfielder Carlos Soler during the summer, unless a club is willing to match his contractual release clause.

Manchester United head coach Jose Mourinho will reportedly go all out to pursue the services of Valencia ace Carlos Soler in the New Year.

Man Utd to make move for Carlos Soler in January