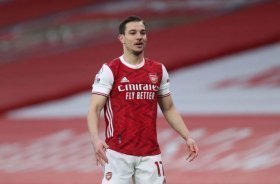 Cedric Soares likes post about Arsenal closing in on transfer of ‘fantastic’ player
by Arsenal defender, Cedric Soares. That’s one Arsenal player that has given his seal of approval to the club’s next incoming transfer, as
26/06 20:30

Arsenal on the verge of landing Serie A star?

Arsenal are on the verge of landing Bologna left-back Aaron Hickey, according to Calciomercato.

Arsenal face Southampton away from home in today's Premier League encounter. The Gunners will be aiming to return to winning ways after back-to-back losses.

Arsenal will be eyeing a fifth-straight Premier League win when they host Leicester City this evening.

Arsenal manager Mikel Arteta could be backed with a significant transfer budget during the next transfer window.