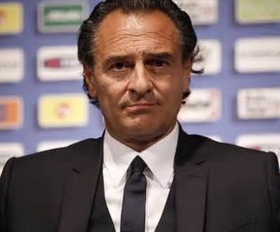 West Ham Links to Cesare Prandelli Are Funny to Some But Should Be Deeply Concerning for Fans
is what West Ham need. For too long, mistakes have been made with managerial appointments, along with dealings in the...
18/12 10:49

West Ham United are reportedly prepared to terminate the contract of on-loan Juventus striker Simone Zaza. The Italy international has failed to live up to his expectations in the Premier League.

Struggling La Liga side Valencia are considering a move for Bayer Leverkusen’s former Manchester United striker Javier Hernandez, according to reports in Spain.

Italy manger Antonio Conte is delighted with the way things turned out, after the Azzurri registered a 2-0 win over Netherlands in their international friendly last night.

Arsenal have apparently agreed a fee with Bundesliga side Wolfsburg and Turkish giants Galatasaray for player Lukas Podolski. The German attacker is free to leave the Emirates Stadium with Arsene Wenger instead favouring youngster Joel Campbell and new signing Alexis Sanchez for the coming campaign.

Galatasaray will not make a move for German international Lukas Podolski, despite reports of a 10 million euro bid having been received by Arsenal for the striker.

Former Juventus coach Antonio Conte will take over as head coach of the Italian national team. Conte stepped down at the Turin side after a disagreement with the club's board of directors.

Galatasaray coach Cesare Prandelli has ruled out a transfer for Arsenal forward Lukas Podolski. There had been rumours yesterday that the German World Cup winner was a target for the Turkish giants.

Gianluigi Buffon could miss out for Italy against England on Saturday night, having sustained an ankle injury during training.

Fiorentina forward Giuseppe Rossi will not be on the plane to Brazil after Italy's manager Cesare Prandelli left the former Man Utd striker at home. Rossi missed a large portion of the Serie A season through injury.

Italy's national team coach Cesare Prandelli has put pen to paper on a new contract until 2016. Prandelli had been linked with a move to numerous Spanish teams.

FIFA's seeding system is a problem that must be addressed

Fiorentina boss Cesare Prandelli has confirmed his interest in Ivory Coast midfielder Emmanuel Eboue, as earlier reported by eyefootball. The Arsenal man is set to quit the Emirates in an 8 million GBP deal, according to reports.

Fiorentina coach Cesare Prandelli has revealed tha the is a big fan of Jose Mourinho, his rival coach at Serie A champions Inter Milan.

It is understood that Stoke City boss Tony Pulis has been casting his eye over 26 year old defender Alessandro Gamberini. It is rumoured that the newly promoted Premiership side are set to offer £2.5 million for the Fiorentina defender.

Reports from several Spanish media sources this morning have indicated that Spanish giants Barcelona are on the verge of making an audacious swoop for Romanian international striker Adrian Mutu from Fiorentina.

Croatian defender Dario Simic is hoping that he can join Fiorentina after yet another disappointing campaign on the sidelines at AC Milan. The defender is expected to be allowed to leave for around £1.5 million.

Fiorentina boss Cesare Prandelli has ruled out any chance of joining Chelsea as the replacement for Avram Grant.

Fiorentina boss Cesare Prandelli has revealed his joy at securing Champions League football for the Viola next season after the Florence side secured the feat ahead of AC Milan on the final day of the season. Prandelli also revealed he has no intentions of walking out on the club.

Fiorentina close in on Gilardino

Fiorentina are making a shock move for AC Milan forward Alberto Gilardino in the summer. The Italian international striker has decided that his future will be elsewhere after falling out of favour at Milan.

Walter Smith's Rangers shocked Europe as they made the final of the UEFA Cup after defeating Fiorentina 4-2 on penalties, as the winning penalty was slot away by Nacho Novo to secure their final place.