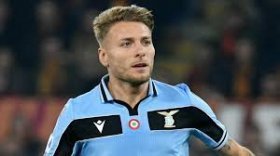 Newcastle's offer to Ciro Immobile as Saudis plot transfer spree following £305m takeover
revealed that his agent was in dialogue with Newcastle over a proposed transfer. The revelation was an indication of the ambition Newcastle
08/10 13:01

Arsenal are reportedly interested in landing the signature of Torino striker Andrea Belotti this summer.

Manchester United to compete with Chelsea for Paulo Dybala?

Manchester United could reportedly make an attempt to sign Paulo Dybala from Juventus at the end of the current campaign.

Manchester United could reportedly make a move to sign Italian striker Ciro Immobile from Lazio during this summer's transfer window.

Everton striker could leave on loan to Serie A club

Everton striker Moise Kean could be permitted to make the temporary move to AS Roma when the transfer window reopens at the end of the season.

Everton to include Moise Kean in deal for 30-goal striker

Everton are reportedly prepared to offer Moise Kean as a makeweight as they seek to land the signature of Lazio striker Ciro Immobile this summer.

Lazio have are reportedly eyeing a summer move for Lyon star Memphis Depay.

Inter manager Antonio Conte wants to bring the Chelsea man to San Siro, according to Italian publication Gazzetta dello Sport. According to Conte, Giroud could provide him with backup options upfront, with Romelu Lukaku who is flourishing after a troubled spell with Manchester United came to an end at the beginning of the 2019/2020 season.

Ciro Immobile's agent Marco Sommella has revealed that his client has no intention of pursuing a January move to Chelsea.

Antonio Conte planning to pair Morata with Serie A striker?

Chelsea could reportedly pursue the services of Ciro Immobile in eight month's time in order to keep Antonio Conte satisfied at Stamford Bridge.

Italian striker Fabio Borini is on the cusp of a move back to his homeland. The Sunderland striker has agreed to terms with Serie A giants Lazio and will reportedly pen a four-year contract with the San Siro based club.