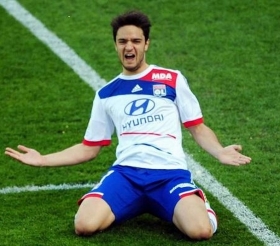 Purported Arsenal target Clement Grenier has dropped his strongest hint yet that he will be finally leaving Lyon. Grenier told reporters that he is open to a move away from the Ligue 1 side.

Franck Ribery ruled out of World Cup through injury

Newcastle have made a bid for 22-year-old attacking midfielder Filip Djuricic. The Benfica player is a target as a replacement for Frenchman Yohan Cabaye.

Newcastle turn their attentions to the Serbian midfielder

Paris St Germain will officially unveil Newcastle midfielder as their newest signing this afternoon at 5pm UK time.The midfielder has agreed a four and a half year deal with PSG and ends his successful stint in the Premier league.

Newcastle are reportedly lining up a move for Lyon attacking midfielder Clement Grenier as a replacement for Yohan Cabaye.Grenier is widely regarded as the best young midfielder in France and has been lined up by Alan Pardew as the perfect replacement for PSG bound Cabaye.

Premier League club Newcastle United are eyeing a move for Lyon midfielder Clement Grenier. The 23 year old is seen as an ideal replacement for Yohan Cabaye who has been linked with Paris Saint-Germain, Arsenal and Manchester United.

Lyon midfield star Clement Grenier has insisted that he had never asked for a transfer away from the French club in the winter transfer window.

Rumoured Arsenal target, Clement Grenier, has decided to agree a fresh contract at French giants Lyon. The midfielder has been widely linked with a move to Arsene Wenger's side this summer.

Lyon midfielder Clement Grenier has told reporters that his club have rejected an offer from Arsenal. Grenier has been outstanding since his promotion to Lyon's first team and club scout Gilles Grimandi has been monitoring the player in action for over 5 months.

The Gunners manager Arsene Wenger has reverted to his old style as he is once again looking out in his homeland for young blood to recruit for his burgeoning team.

Lyon's midfielder Maxime Gonalons will be staying at the French club. The club captain has no plans to quit the French side despite the long term interest of Italian side Napoli and Arsenal.

Tottenham to sell Defoe and Parker?

It's going to be a busy summer at White Hart Lane. According to reports from the Metro, Spurs are ready to sell Scott Parker and Jermain Defoe. The England internationals have reportedly been told they are free to leave the club.

Lyon midfielder Clement Grenier still remains uncertain about where his future lies. The talented midfielder has been linked with a host of clubs this summer, with Arsenal seemingly the favourite to sign him.

Yoann Gourcuff has put the Gunners on red alert after admitting that he could look for a fresh challenge elsewhere. The Lyon attacking midfielder has long been linked with a move to the Premier League.

Lyon midfielder Clement Grenier still remains unsure about what the future holds for him. The player has been linked with a move to Arsenal several times, but so far no transfer deal has come to fruition.

Clement Grenier has strongly hinted that a move to Arsenal this summer is a possibility. The Lyon midfielder is very highly rated by French manager Arsene Wenger; the Gunners have been tracking Grenier for over two years.

Arsenal manager Arsene Wenger admitted on French television that the signing Clement Grenier this summer remains one of his priorities. The Lyon playmaker has been compared to former Gunner; Samir Nasri.

Lyon have received a 9.2m EUR offer for midfielder Clement Grenier this week; and in an eyefootball exclusive we can reveal that Arsenal have made Grenier their number one target for the January transfer window.

Tottenham boss Harry Redknapp has been scouting Lyon midfielder Clement Grenier for over a year, and will finally make an offer for the youngster this summer.