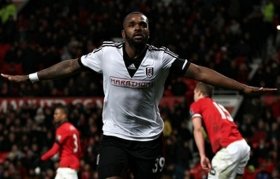 Darren Bent believes Chelsea are capable of finishing above Liverpool in the Premier League after their summer spending.

Darren Bent has advised his former club Tottenham Hotspur to land the signature of Ryan Fraser on a free transfer during the summer.

Swansea City are weighing up a pay-as-you-play free transfer for experienced forward Darren Bent. The striker had been released from his contract with Aston Villa.

Aston Villa have recalled Darren Bent from his loan spell at Fulham and hope to give the striker a second chance at the club.

West Ham manager Sam Allardyce wants to bring Darren Bent to Upton Park; but only if Bent's club Fulham are relegated.The Hammers have been linked with a move for the striker for over three years but now are confident that a deal can be agreed in the summer.

Moussa Dembele will stay at Fulham despite interest of Liverpool

Fulham are hopeful that 17-year-old striker Moussa Dembele will stay at Craven Cottage. The youngster has been prolific for the under 21 side and has attracted the attentions of scouts representing Liverpool and Manchester United.

Aston Villa defender Alan Hutton has hit out at his club after being denied a chance to seal a move away from Villa Park this summer despite being told he has no future at the club.

Jol hits back at Pardew for comments on Darren Bent

Fulham boss Martin Jol has responded to Alan Pardew's claim that Aston Villa striker Darren Bent opted for Craven Cottage as it was a 'safer option'.

Arsenal grabbed their first league win of the season by beating a lacklustre Fulham side at Craven Cottage, by 3 goals to 1.

Fulham manager Martin Jol expressed his delight on having made some shrewd transfer business this summer and has reveale that they are not done yet.

Darren Bent has completed a transfer move to Fulham this afternoon, agreeing a loan deal that gives the Cottagers an option to make a permanent transfer for the Aston Villa forward next year.

Darren Bent to wrap up Fulham transfer this week

Fulham are confident that a deal can be agreed with Aston Villa to sign striker Darren Bent. The England international forward has long been linked witha  move away from Villa Park, but has seen deals to Newcastle and Crystal Palace fall through.

Fulham have made an improved offer for Aston Villa front man Darren Bent according to Sky sources.

Newcastle United boss Alan Pardew has revealed that they are still chasing the signatures of Lyon striker Bafetimbi Gomis and Aston Villa front man Darren Bent but has reaffirmed that the club won't be overpaying for them.

Aston Villa forward Darren Bent will not be joining Newcastle after talks between the two clubs fell through last night. It is understood that Bent's representatives were left disappointed after Newcastle were unable to match Bent's existing package at Villa.

Fulham are reported to be leading the race to sign out of favor Aston Villa striker Darren Bent according to Sky Sports.

Newcastle's manager Alan Pardew is still hopeful that he will be able to sign some new strikers for the coming season. Loic Remy, Darren Bent and Bafetimbi Gomis have all been linked with a move to St. James' Park.

Newcastle's major transfer target Bafetimbi Gomis has been sent to play with the Lyon reserves, as the French international striker pushes Lyon to the brink to help him secure a transfer move to the Premier League.